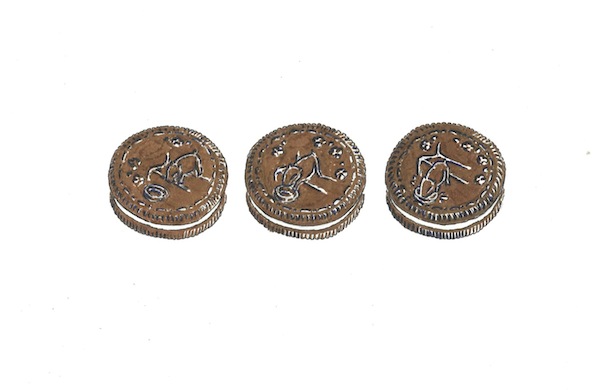 At the 2014 SXSW festival, everyone has one thing on their mind—Twitter-inspired 3D Oreo printing. Nabisco’s oversize vending machine algorithmically translates trending Twitter hashtags into custom cream-filling flavors, which are then printed onto waiting Oreo wafers. Always eager to embrace new food trends, the Groupon Corps of Engineers whipped up their own highly advanced version of the machine. The construction involved duct-taping a laser cutter onto a 3D printer, then syncing it with the web-browsing habits of Groupon employees. The results are custom-shaped Oreos cut into the images of some of our workers’ most-searched Internet subjects. Here are a few of the most recently printed cookies: The Piglet-GIF Oreo: In quick succession, the printer spat out 47 Oreos. This confused us at first until we lined them up and recognized them as frames from a Tumblr-famous GIF depicting a piglet falling into a bowl of oatmeal. The Angela Merkel Stern Smile Oreo: Unfortunately, Groupon employees are sophisticated Twitter users, leading to boring Oreos cut into detailed busts of respected world leaders. Though, to be fair, the German chancellor on a cookie was a sight to behold. The Facebook Photo-Tag Oreo: Even though many of us tried desperately to untag ourselves from our friends’ wedding albums on Facebook, the printer still managed to replicate our awkward attempts at the Electric Slide into equally awkward-looking cookie representations. The Scattered YouTube History Oreo: The 3D printer had to be reset after shorting out when it tried to distill the complex blend of cat videos, movie trailers, and bootlegged episodes of Diff’rent Strokes in our YouTube histories into a single cookie. The Abyss Oreo: We thought it had to be a glitch…the machine produced a featureless cookie. Gazing at its completely blank face was like staring into the void. Oh, right—Google Plus. The Infinity Oreo: With all the Groupon employees at SXSW currently Instagramming their custom Oreos, our machine spat out an infinitely recursive cookie. An Oreo printed on an Oreo printed on an Oreo…repeating forever. We tried unplugging the machine but it’s unstoppable now. Check Groupon.com tomorrow for a great deal on at least 100,000 Oreos, maybe more!
BY:
Customer support
Help Center
Refund Policies
Report Infringement
Sell on Groupon
Join Groupons Marketplace
Run a Groupon Campaign
How does Groupon work for Merchants
Sponsor your Campaign
Affiliate Program
Vendor Code of Conduct
Company
About
Jobs
Students
Press
Investor Relations
Management Team
In Your Community
Quick Links
Treat yourself
Things to do
Coupons
Gifts for Occasions
Follow Us