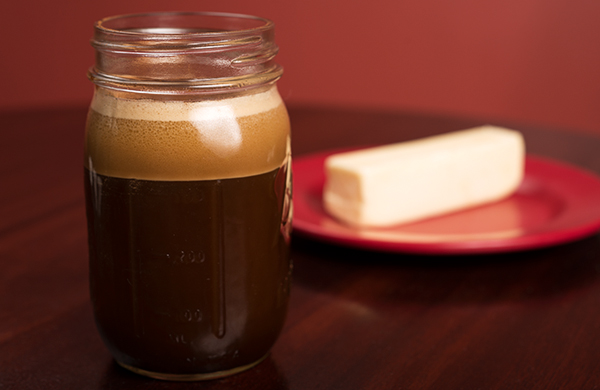 Some people take their coffee with sugar and cream, while others swear by a black brew. But ever since 2013, a growing contingent of people have been adding a new condiment to their mugs—grassfed butter. The practice traces its roots to the Himalayan slopes. There, many Tibetans stir yak butter into their tea to create a drink with enough nourishment to fuel them for days of work in freezing weather. They offer the tea to visitors, too. It was one such visitor—a hiker named Dave Asprey—who launched a version of the drink in the United States.

When Asprey tweaked the Tibetans’ traditional recipe, his goal was to take the beverage’s rejuvenating properties to new levels. To do so, he substituted coffee beans in place of tea leaves and altered the drink’s fat content by stirring in grassfed butter and MCT oil rather than yak butter. The result—known as Bulletproof coffee—rapidly gained popularity among paleo-diet enthusiasts, who believe that it sharpens cognitive function and suppresses the appetite. Now, new variations on the trend are spreading to cafés. We tracked down Mikky Wright, founder of Chicago’s Ugly Mug Café, and asked him a few questions about butter coffee. What’s in the butter coffee at Ugly Mug Café? “Dark roast from Two Brothers Coffee Roasters, coconut oil, and grassfed unsalted butter. We also add a touch of agave and cinnamon.” What does it taste like? “It’s really creamy. When I drink it, I still taste the full flavor of the roast. We do add a touch of agave and cinnamon. … To me, it’s an even-keeled caffeine buzz.” Does it really suppress your appetite? “When I drink it, I’m surprised how filling it is. I’m getting the caloric intake of the dairy plus the density of the fat of the grassfed butter. When I drink the butter coffee, I forget to snack. [But] it’s a beverage, not a meal replacement, even though it does have a lot of the proteins and fats that your body requires.” Photo by Andrew Nawrocki, Groupon Shop for deals on coffee and treats.
BY:
Grouber