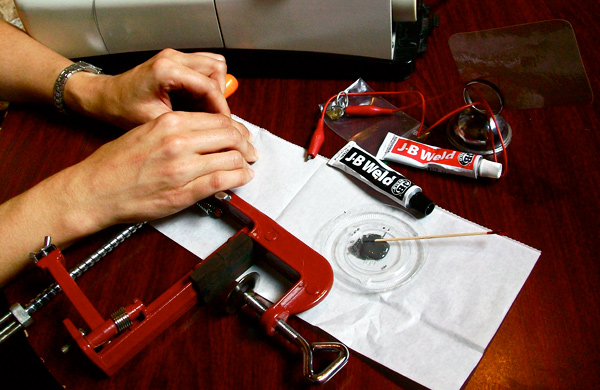 You can smell the sawdust as soon as you step off the Red Line at Berwyn. In front of the Kitchen Sink café, a few onlookers gather as a power drill hums. Right there on the sidewalk, an elegant but badly cracked wooden chair is being made safe to sit on once more thanks to the help of an amateur carpenter. “What I want to know is how Ally finds all these volunteers!” exclaims the chair’s owner, an older woman sitting inside. She sounds almost suspicious—there has to be some kind of catch, right? Who are these people who show up every month with toolboxes, soldering irons, and sewing machines? What possesses them to spend their Sunday afternoons fixing strangers’ stuff for free? The answer starts with Kitchen Sink owner Ally Brisbin and with Carla Bruni, who was once just a regular at the café. Last year, armed with little more than enthusiasm, curiosity, and a talent for making friends, the two started Community Glue Workshop as an effort to bring neighbors together and give new life to objects that would otherwise wind up in a landfill. For a few hours a month, the café becomes a clinic for broken toasters, stuck zippers, and many, many lamps—at least four will pass through October’s clinic before the night is over. Connected by Curiosity For the most part, the fixers don’t come armed with any formal training, just a passion for taking things apart. One volunteer I talk to is a product engineer, but his partner in solving the mystery of a malfunctioning monkey lamp manages a string of Burger King restaurants. Brisbin is good with jewelry—earlier tonight, she swapped out a necklace chain that had been made of highly allergenic metal. As for Bruni: “I don’t know what I do,” she laughs. “I do a lot of gluing of things; sort of the dumb labor. My larger function tends to be making sure people are busy and happy—making connections, getting the right things to the right people.” Those connections have been long-lasting, to a degree that’s surprised even the founders. “At the beginning we were like, ‘We need to make sure that we have a ton of people to draw from, because people get burned out,’” Brisbin remarks. Instead, a solid and growing core group of fixers keeps coming back. “We’ve had a lot of friendships happen,” Bruni says. “A lot of mentorships between the fixers as well, which has been really neat … That helps keep people engaged, to know that you can learn more skills.” How the Fixing Spirit Spreads People who arrive toting a couple broken appliances and not much hope tend to catch the fixing bug fast once they arrive at Community Glue Workshop. That would include the man who’d been working intently on a jammed cash-register drawer when I first walked in. Bruni explains: “He emailed me a few times asking me about things and was like, ‘I just want to come to observe today.’ And he immediately started working. He was just like, ‘I need a screwdriver!’ … And I knew 100% that was going to happen. It always happens.” The clinics have been so successful that I wonder whether Brisbin and Bruni have any plans for expansion. But a worldwide empire of repair cafés isn’t in the works—not that it hasn’t been suggested to them. After a recent appearance on NBC Nightly News, Bruni says, “a lot of emails came in from people around the country asking, ‘Hey, do you guys have a clinic in our town?’ … But, you know—this is about relationships we have with people; that’s a really huge part of it … I think things work really well locally.” Instead, she says, they’d eventually like to put together a guide so that other people can follow Community Glue’s example in their own neighborhoods and communities. For now, though, anyone’s welcome to show up to the Kitchen Sink on clinic nights—check their Facebook page or website for dates, which tend to be announced a few weeks in advance. Feel inspired to get your hands dirty? Click here to read some rules of thumb from Brisbin, Bruni, and a few other Community Glue fixers.
BY:
Grouber
POPULAR THINGS NEARBY
Beauty & Spas
Food & Drink
Things To Do
Health & Fitness
Automotive
MassagesRestaurantsThings To DoChiropractorsOil ChangeLaser Hair removalChinese FoodBowlingGolf CoursesCar WashNail SalonsIndian RestaurantsTrampoline ParksGyms & Fitness CentersCar RentalBotox InjectionsSushiEscape RoomsDentistsVehicle Repair ServicesTattoo ParlorsPizzaMovie TheatersDermatologistTires RepairSalonsSteakhouseKids ActivitiesWeight LossWindshield RepairBarber ShopsBars & PubsBeer & Wine Tasting ToursYogaParking
COUPONS & PROMO CODES FOR YOUR FAVORITE BRANDS
Amazon Promo CodesWalmart CouponsTarget CouponsMacy's CouponsKohl's CouponsTJ Maxx CouponseBay CouponsBed Bath & Beyond CouponsAmerican Eagle Promo CodesOld Navy CouponsHome Depot CouponsLowe's CouponsMichaels CouponsZales Promo Codes1-800-Flowers CouponsForever 21 CouponsVerizon Wireless Promo CodesAdidas Promo CodesASOS Promo CodesBoohoo Promo CodesL.L.Bean CouponsEdible Arrangements CouponsWeight Watchers CouponsSephora CouponsAncestry DNA CouponsH&R Block CouponsTurbotax Service CodesQuickbooks CouponsUdemy CouponsSamsung Coupons