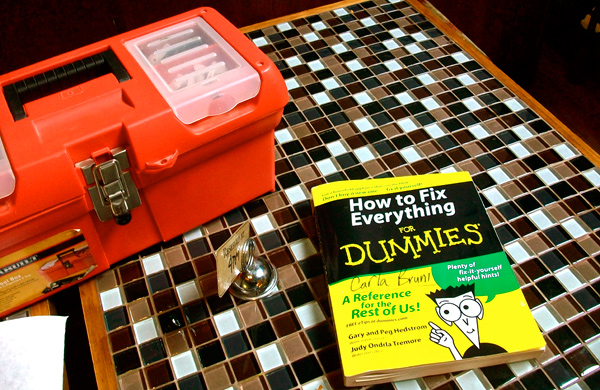 Every month, Ally Brisbin, Carla Bruni, and a passel of friendly volunteers show up at the Kitchen Sink café’s Community Glue Workshop and seek to put appliances, toys, clothing, and just about anything else you can imagine back in working order. At a recent clinic, they shared their words of wisdom for prospective fixers and ordinary owners of broken stuff alike: Nothing is off limits … When asked about unusual objects that had passed through their hands, every fixer had a story. They’ve replaced the ropes on a cat tree, maneuvered an underwire back into someone’s bra, repaired old slide projectors and garage-door mechanisms—even coaxed a little boy’s antique toy robot into flashing and lurching like new. Complex modern electronics aren’t necessarily off limits, either. Sometimes a malfunctioning laptop just needs to have its case opened and a loose component nudged back into place. … though not everything can be fixed. It’s true the fixers are occasionally foiled by problems such as defunct or missing parts. (Though even this isn’t necessarily a dead end—most months, one volunteer brings along his 3-D printer to fabricate small plastic pieces.) Sometimes that means you can rest easy knowing you’ve done all you can to resuscitate that old blender; sometimes it just means you’ll leave with suggestions rather than a completed repair. And the search for a fix can be satisfying in itself. During October’s clinic, 71-year-old librarian Satia Orange brought in a wooden radio/cigarette case, carved and painted to resemble a bookcase; as a little girl, she used to play with it in the office of her library-director father. Although the fixers couldn’t find the problem, they noted that the wiring was in good shape and could probably be fixed by a radio specialist. In any case, Orange clearly enjoyed the chance to share the antique and its story. Boldness is rewarded. “This may work or it may ruin it,” said fixer Brian as he peered inside an old electric razor, soldering iron at his elbow. After some deliberation, the razor’s owner decided to chance the repair—and, success! Consider that if you’re bringing in an already broken object, you probably don’t have a great deal to lose. And be honest with yourself: will you really call around to repair shops, or will it go back into the closet if you don’t experiment with a DIY fix? You need fewer tools than you’d think. But more glue. “We don’t use many power tools, truly,” Carla Bruni says. “We don’t really need to.” Screwdrivers and pliers go a long way—even further if you have an inexpensive soldering iron kit. And it never hurts to stock up on glue. Bruni: “I joke about how I mostly just glue things. But honestly? There are so many kinds of glue! I’ll be honest, I did not know how strong Elmer’s glue is … There’s shoe glue, specifically, you know.” Ally Brisbin recommends the website This to That for figuring out exactly what variety of sticky stuff you need. Don’t hesitate to access the hive mind. It’s common to see two or three people gathered around any given “patient” at Community Glue, and any one of those might well call a friend or family member for further guidance. YouTube tutorials have proved helpful to the crew on occasion, as have reference books such as Fixing for Dummies. “It drives [our carpenter] Paul nuts every time we put it out,” Bruni says. “‘It makes us look like dummies!’ But it’s got everything.” This wealth of resources means that people often come in to work on their own tinkering or sewing projects, knowing that enthusiastic helpers are just a table’s length away.
BY:
Grouber