Personal trainer Sari Weis didn’t enter the fitness industry to get ripped—she did it because she wanted to teach again. As a marketing and public-relations consultant in her late 20s, she missed the sense of accomplishment she used to get from being a high-school teacher. At the same time, she was exploring the fitness world for herself, and became inspired by the changes she saw in her own body. 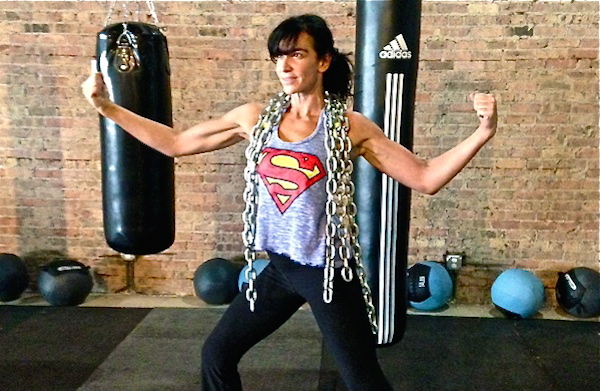 “That’s what enticed me…I like to watch people grow,” she said. Today, Sari takes on clients as an independent trainer at Reach: Beyond Fitness in Ukrainian Village. But she also practices fitness tricks outside the gym, and advises her students to do the same. We appealed to her love of teaching to get 10 of her tips for a healthy lifestyle, whether you’re working out, running errands, or hanging at home.

1. Bring a jump rope. Between sets, don’t let your heart rate flag too much—jump rope to get it back up. If you don’t have a rope and there are no treadmills available, then “make the gym functional.” Go up and down the stairs, or do burpees wherever there’s room.

2. When you’re doing ab exercises on your back, like sit-ups, “keep your eyes parallel to the ceiling.” It’s a good rule of thumb to keep you from straining your neck.

3. When you’re doing bicep exercises, watch your feet. If you’re standing and lifting dumbbells, put your feet together. That stance will destabilize you and force your core to work more. If you’re standing on a resistance band to do your curls and there isn’t enough resistance, don’t immediately search for a heavier band. Instead, spread your feet apart on the band to increase the difficulty. On the other hand, if there’s too much resistance, take one foot off.

4. Let go of the idea that modifications make things easier. Modifications aren’t supposed to baby you—they’re supposed to make an exercise as challenging as it can be. “If you’re doing a full pushup the wrong way, then that’s going to be easier than a modified pushup with good form,” Sari said.

5. Think of your lungs as a muscle that you’d like to tone, too. Sari often sees people lifting like crazy but forgetting to breathe. Try to inhale and exhale with purpose.

1. Don’t just park far away—spend more time at Target. Or any department store, really. Make a game of exploring every aisle so that you take a sizable walk.

2. Get wobbly. When you’re standing or sitting on an unstable surface, you’re using your core to balance. You don’t need to buy an exercise ball or a special chair, “just put something unstable underneath your butt or feet.” For example, try to get through a sitcom while sitting or standing on an overstuffed pillow.

3. Buy ankle weights and arm weights. Wear them whenever. Put them on and pace while you talk on the phone, or “sit on the couch and do leg lifts while watching TV.”

5. Eat chicken instead of chips. Simply chop it up into dippable pieces, and enjoy it “with your hummus, with your dip, with your salsa,” Sari said. This way, you can fulfill snack cravings and get some protein.