How to Keep Your Food Safe from Bears 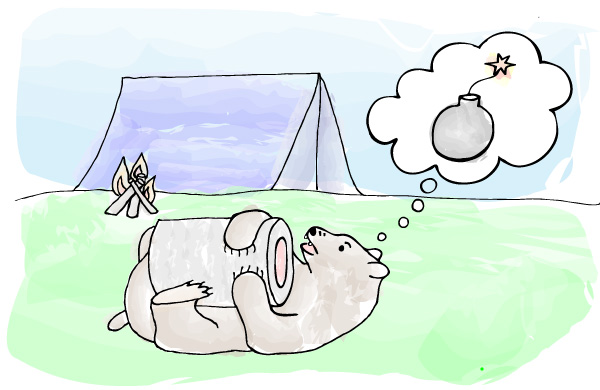 Nature. It’s so full of bird song and sunlight, all quiet and peaceful. You’d never know that amid all that beautiful scenery, bears and humans are locked in a vicious arms race. The prize: all your favorite camping snacks. Ten years ago, campers in bear country could string a bag of food up in a tree and expect it to remain safe, as long as it hung far from the branch. The practice, called “bear bagging,” went through many iterations over the years, with the ropes getting more complex and weblike as bears got better at figuring out how to cut them down. Nowadays, though, it often doesn’t matter how many ropes you use. Bears in high-traffic camping areas are wise to the game. “If they see this rope going up to a tree, they do whatever they can to claw or chew their way through that rope, and a bag of food magically falls from the sky,” said Chuck Stark, a senior instructor at the REI Outdoor School for the Chicago area. “Bears are smart, and they’re strong, and they’ll do whatever it takes.” Even metal doesn’t always stop them: in Yosemite National Park, they’re even known to rip car doors open to get to the food inside. But don’t give up hope. Here a few other ways to keep your stash of Clif Bars safe from grizzlies in 2014. Shop deals for camping equipment on Goods. Use a Bear Locker For all their strength and unquenchable love of Cheetos, bears have one weakness: their lack of opposable thumbs. “It’s really the one thing we’ve got,” Stark joked. That’s why major campgrounds in bear country often provide bear lockers—large, dumpster-like metal bins whose double locks are complex enough to thwart bear paws. “You really have to have a lot of dexterity to reach under there and release this locking system,” Stark said. Bring a Bear Canister Of course, sometimes campers will find themselves far from a campsite with a locker. That’s where bear canisters come in. The portable hard plastic containers—which look ”like a giant Nalgene water bottle,” Stark said—are closed with a screw and locking tabs that also thwart bears’ clumsy paws. If a giant Nalgene doesn’t sound like a secure way to store your food, you’re in for a surprise. Here’s video of a very persistent bear who just can’t accept that he’s never getting into that BearVault: Sleep Far Away from Your Food As annoying it is to wake up to gnawed food bags, it’s much worse to wake up to a bear scarfing down trail mix at the edge of your sleeping bag. To avoid unpleasant surprises, Stark advised storing your food at least 100 feet away from wherever you spend the night. If you’re cooking, set up the kitchen at least 100 feet from both your food-storage and sleeping sites. Most of all, though, work to keep your campsite clean and free of food debris. Bears will go to amazing lengths to get at food locked in a container or car—they definitely won’t think twice about trespassing to get at food that’s just lying there.
BY:
Grouber