A Cold Korean Soup for Summertime 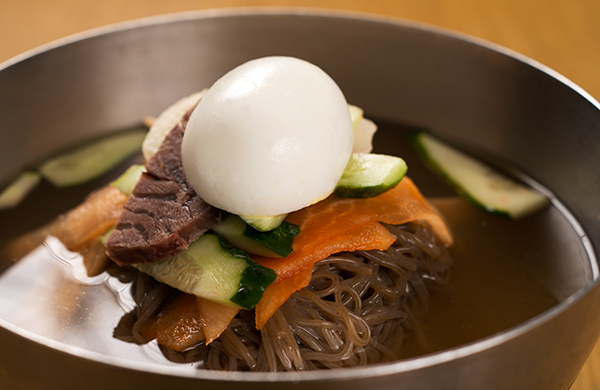 Maybe it’s the icy chill of the beef broth, or its near-colorless clarity. But the first sip of a bowl of mul-naengmyeon feels like a sudden plunge into a mountain lake. Though its flavor is light, this cold Korean buckwheat-noodle soup is still a shock for the senses, in a refreshing way. In summertime, it’s an ideal savory treat—and a great way to stretch your Korean-food palate beyond basic bulgogi, kalbi, and bibimbap.

To drink up my latest bowl, I headed to Ban Po Jung, a mom-and-pop shop in Chicago’s North Park neighborhood.

The textures in a bowl of mul-naengmyeon are at least as important as the flavors—and that’s where the toppings come in. The crisp crunch of traditional sliced cucumber and asian pear set off the chewy slipperiness of the noodles, as does the falling-apart tenderness of cold boiled beef. It’s a symphony of different mouthfeels in a single stainless-steel bowl. Many restaurants, including Ban Po Jung, place a hard-boiled egg on top, too.

Mul-naengmyeon broth is extremely mild on its own, so it’s usually served with bottles of white vinegar and a spicy, watery mustard sauce that you can sprinkle on for an extra kick. I tend to go all in on the vinegar and use the mustard only sparingly—I want sour but not too much sizzle in my chilled summer soup.

Massed in the middle of the bowl, the long, thin naengmyeon noodles are surprisingly heavy, a meal in themselves. Though they’re usually made out of buckwheat, like Japanese soba, you can also find versions derived from starches like sweet potato and chewy arrowroot. Say yes if your server offers to cut up the super-long noodles with scissors, as mine did at Ban Po Jung—it makes them a lot easier to eat. Once they’ve been clipped, don’t be bashful about leaning in close to slurp up the noodles in the time-honored Asian style. But watch out not to over-indulge—mul-naengmyeon is usually only one part of a larger meal, so there’s likely to be plenty of barbecue dishes and banchan still to come.

Hungry for more? Check Groupon for deals on Korean restaurants in your city.