The Best of Pitchfork Music Festival 2014 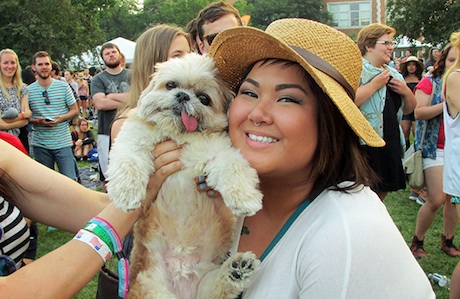 Compared to previous years’ rainstorms and heat waves, 2014’s Pitchfork Music Festival was all sunshine and cool breezes. The idyllic weather helped set the vibe for the 43 performances spread over the three-day event. Here are our highlights of the festival’s best moments (both musical and non-musical): Musical Best Headliner: Beck 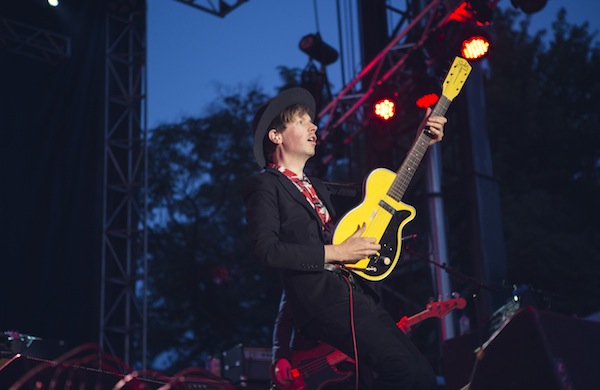 Neutral Milk Hotel delivered an intimate set to loyal fans and Kendrick Lamar ended the fest on a bombastic note, but Beck’s Friday-night showmanship proved hard to top. He showcased well-known (aka funky) hits—“Loser” and “E-Pro” among them—as well as the softer, more introspective side exhibited on albums like Sea Change and this year’s Morning Phase, reminding fans of his status as a true genre chameleon. The constant hopping from hip-hop to blues to country all built to a maximalist encore that included a wicked harmonica solo, an early-career medley of “Where It’s At,” “One Foot in the Grave,” and “Miss You,” not to mention an impressive amount of dancing. Best Finale: St. Vincent 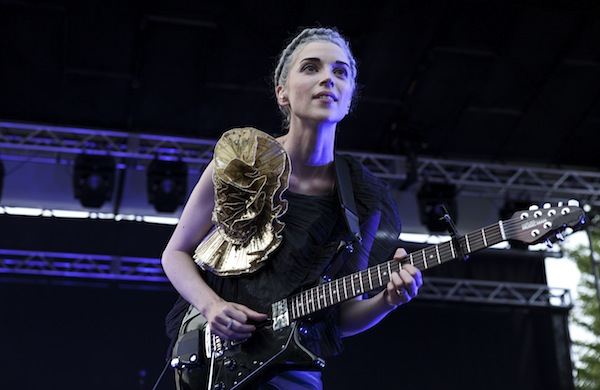 The bewitching St. Vincent owned the Red stage on Saturday with her ferocious guitar playing and raw choreography. There were no straight-up dance routines, but Annie Clark practically glided across the stage, moving in synchronicity with her backup guitarist to give the show a near-cinematic quality. Clark (whose gold-embellished dress would look at home on any red carpet) ended her set by rolling around on the stage and smashing her head into a bass drum—her post-show icing was well-deserved. Best Brass: Neutral Milk Hotel 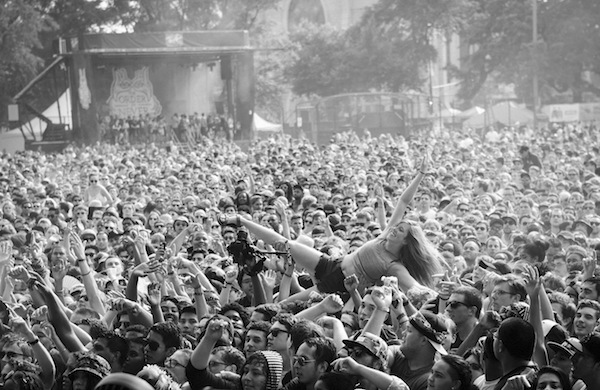 It’s not every year that a tuba takes center stage at Pitchfork. Then again, few things about Neutral Milk Hotel’s set were conventional—the lack of photo and video coverage, for one, and the fact that the crowd felt “Holland, 1945” was moshing music. All shoving aside, the band delivered an emotional set that was true to the antiquated sideshow spirit of their cult album In the Aeroplane over the Sea. A heavily bearded Jeff Mangum sang in his broken-boy yowl while Scott Spillane blew the brass until his cheeks were purple and Julian Koster shredded his bow on a musical saw. Best Near-Disaster: Majical Cloudz The weekend was not without its glitches—the most severe of which was a complete keyboard failure for Majical Cloudz. Whereas Pusha T delayed his set by 30 minutes to wait on a late DJ, the electro-pop duo decided to power through their technical difficulties with a largely a cappella set, drawing on the audience for handclaps and making a few jokes along the way. Things ended dramatically with an onstage demolition of the busted keyboard. Best Rookie Rapper: Isaiah Rashad 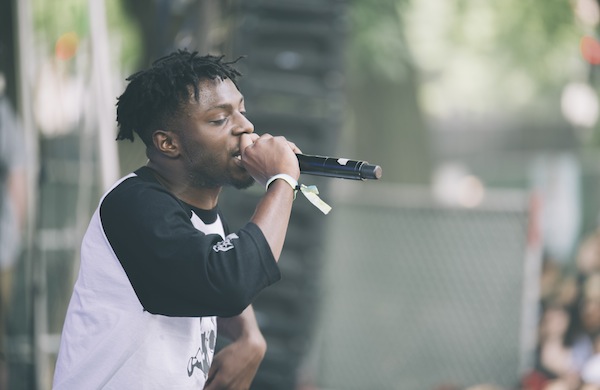 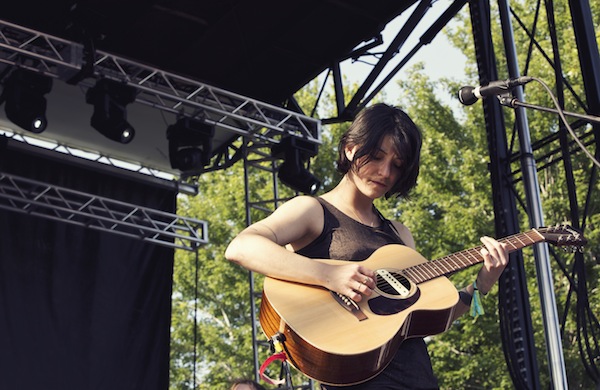 Near the end of her downtempo yet emotionally powerful set, Sharon Van Etten dropped in a plug for the dry-hopped kölsch she helped make for Goose Island Beer Company. “They asked me if I wanted to collaborate on a beer, and I said ‘Yeah, if you want it to be disgusting,’ but it was really good!” Indeed, the SVE Kölsch was a hit, though you won’t find the limited-edition brew outside this year’s Pitchfork Festival—yet. Non-Musical Best VIP: Marnie the Dog 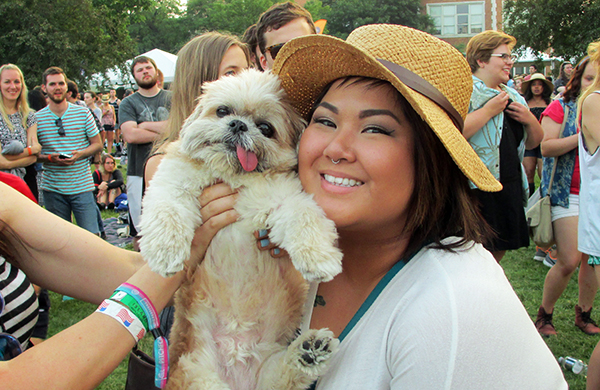 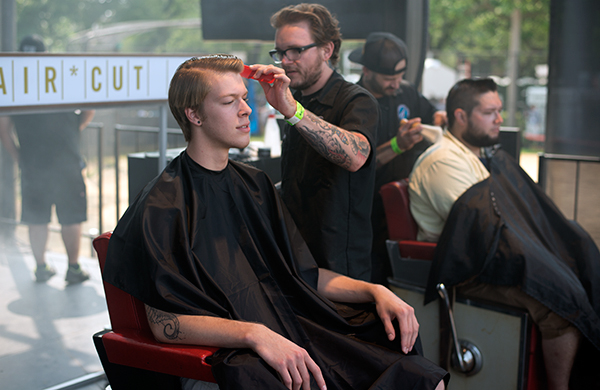 Tyler Scott and Will Valentine of Joe’s Barber Shop gave out more than 200 free haircuts at the festival this weekend. The catch? Their clients had no say in what kind of style they received. “I made a girl cry,” Scott said. “I shaved half her head.” Nonetheless, most festival-goers left happy. “It’s a free haircut. You get what you get!” Best Artwork: Geometric Village from Johalla Projects 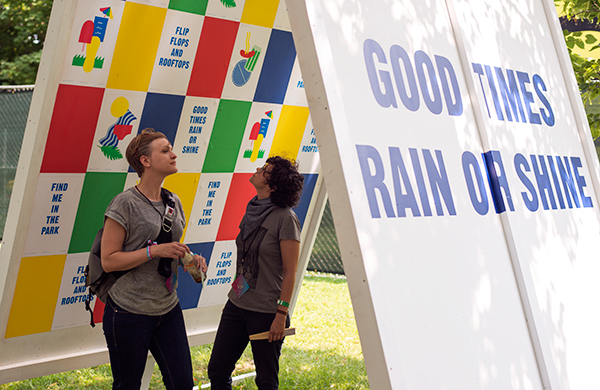 Johalla Projects debuted its newest public art piece at Pitchfork: a duo of tent-like structures designed by collage artists Heather Gabel and Chad Kouri. The two contrasting pieces created a sort of Choose Your Own Adventure depending on who was playing the nearby Blue stage. Kouri’s vibrant, simple prints and upbeat slogans paired well with the carefree electro-pop of Avey Tare’s Slasher Flicks, while Gabel’s stark black-and-white images included a human skull and a coyote torso that complemented the darker, more contemplative compositions of Jon Hopkins. Best Craft: Mia Weiner’s Custom Embroidery 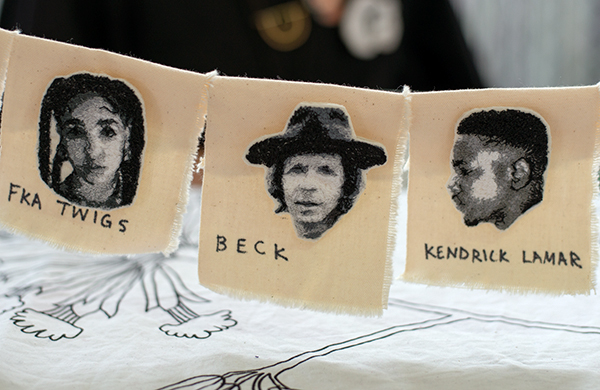 In the craft tent’s sea of chunky plastic earrings, flower-adorned sunglasses, and ironic T-shirts, Mia Weiner’s booth stood out for its direct connection to the music. Her custom-embroidered pieces—each taking untold hours to complete—offered a truly unique souvenir: hand-stitched flags and pins of the festival’s featured artists. Request your own custom piece from her online shop, How Could You?. 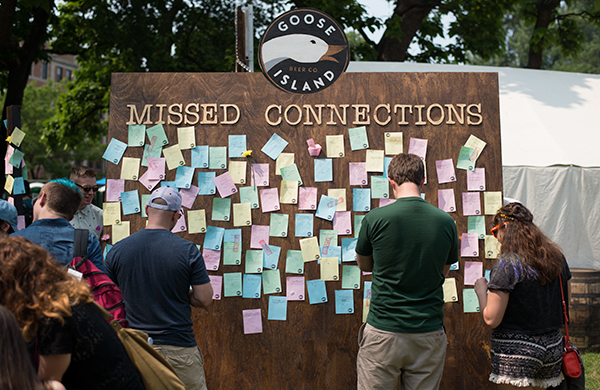