Inside the cramped kitchen at Taco Joint’s River North location (158 W. Ontario St.), Ofelia Rojo makes tortillas. But to reduce her role as a “tortilla lady” to that seemingly simple action would obfuscate the true extent of what her job requires. Namely, spending her entire shift in front of a searing-hot flat-top grill, an industrial-size behemoth that’s been known to inflict burns on anyone who just happens to be standing too close to it. It’s here that Ofelia creates each tortilla one at a time. Over the course of their day, she and her fellow tortilla lady will press and cook some 500 tortillas. Five hundred tortillas. By hand. One at a time. Thanks to their careful and tireless technique, the tortilla ladies deliver the freshest tortillas possible—with consistently delicious results. Unlike others out there, Taco Joint’s tortillas never dry out or harden at the edges. So to find out how they do it, I joined shift manager Alfredo “Al” Arteaga to follow Ofelia’s process from start to finish. Along the way, I learned the five steps that make up the secret behind these magical disks—along with some inspiration for improving my own technique. 1. Surprise Ingredient 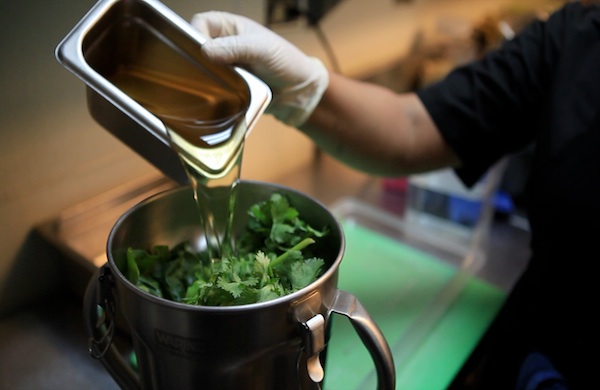 Tortillas usually contain three ingredients: masa (also known as corn flour), water, and salt. At least, that’s what the back of the masa package would have you believe—and why the tortillas I make at home have always seemed so dry. At Taco Joint, however, Ofelia also includes corn oil, which adds moisture to the dough. The resulting tortilla retains its softness even as it cools down. 2. Naturally Colorful Taco Joint adds another special touch to its tortillas—color. Natural, food-based ingredients, such as the poblanos and spinach for this batch, provide a fun touch. The hues rotate daily; on Monday, for example, Ofelia would add black-bean purée to her dough for an almost blue-colored tortilla. 3. Mixing It Up Using a wide-bowled electric mixer, Ofelia combines the colorful liquid she just blended with masa and water, eyeballing the liquid amount till the consistency looks right. The final mixture looks a bit like play-doh. 4. The Right Touch 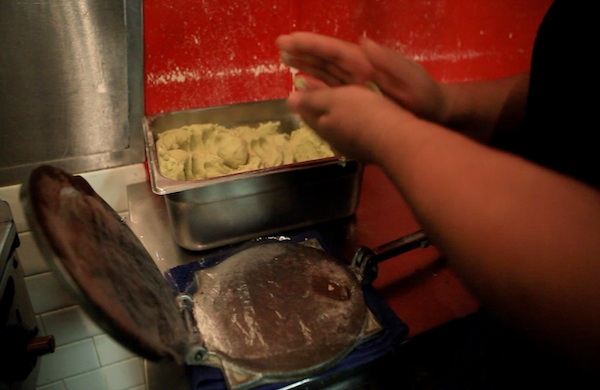 Now it’s time for Ofelia to form and cook the tortillas. Ofelia places a dough ball in a cast-iron press and applies just the right amount of pressure to flatten it into a still-thick disk. At home, I’ve been squeezing as hard as my own press will let me, resulting in tortillas that are crumbly and dry. 5. Made to Order

One at a time, Ofelia presses dough balls and lays them on the flat top. Drawing on an inner timer, she flips them over by hand, watching for them to start to puff up. Turning them over one more time, she pulls each tortilla off the grill and deposits it into a waiting cooler. She makes just a few at a time, enough for the line cooks to get started, replenishing their supply throughout her shift. This ensures that the tortillas stay warm, soft, and moist. Final Thoughts 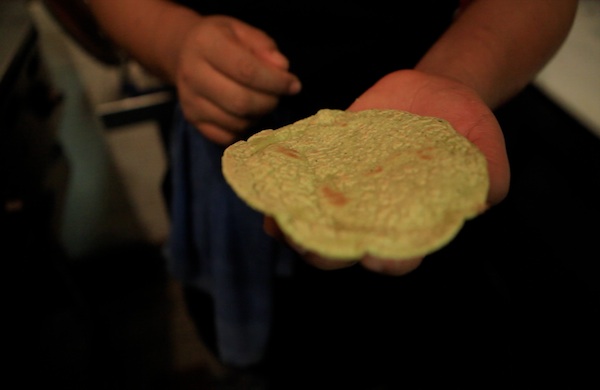 Watching Ofelia’s process, I was surprised by how much just a few tweaks in a recipe or technique can affect the end product. Adding oil and using a softer hand when pressing the dough had never occurred to me, yet these two small changes elevate Taco Joint’s tortillas into a different stratosphere. With these tricks up my sleeve, I anticipate much better results at home. Let’s be honest, though: imitation may be the sincerest form of flattery, but when Taco Joint is dishing up such mouthwatering made-to-order tacos so close to my home and office, I don’t see too much of a need to reinvent the corn-flour wheel. Video and Photo credit: Corey Wills, Groupon
BY:
Grouber