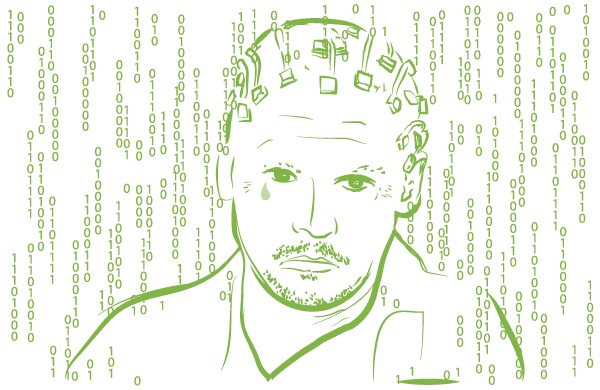 Watching movies may be one of America's most popular date-night activities, but it can also be one of the most contentious. That's where critics and real-life couple Roy and Adriane step in, putting their relationship on the line so you don't have to. HIS TAKE Imagine you’re on a first date with a rich, good-looking person who charms you through dinner with talk of science and philosophy, plays footsie with you, and then suddenly dumps a plate of spaghetti in your lap. That’s the experience of watching Transcendence, a hot mess that ultimately leaves you cold. Fans of Christopher Nolan might feel like sending sympathy cards to first-time director Wally Pfister (Nolan’s cinematographer) for swinging so hard at a script that pitches one wet diaper after another. The premise is not so implausible, but it’s not anything new—it’s The Lawnmower Man with talent, money, and flat-out superb visual effects, but without a second of fun. The script—a slab of flaccid sci-fi soul-searching—sticks to the same old “man shouldn’t play god” tropes. And it’s a shame, because the movie suggests that you side with the hacker-terrorist jerks trying to take down the power-mad Depp. They’re supposed to strike a chord in audiences who miss the good ol’ days before the Internet became ubiquitous, but the group—led by a surly Kate Mara—ruthlessly murder other humans in order to promote their cause. When the film finally reaches a final blowout between man and machine, or R.I.F.T. and Depp-God, Transcendence forgets to take a side, forcing this muddled epic to come crashing down in a puddle of “meh.” – ★★, and that’s just for the cinematography HER TAKE Transcendence feels like a four-hour film whittled down to half its length. The first directorial effort from Wally Pfister tackles some pretty heady subject matter, including artificial intelligence and the over-technologizing of society, but none of the ideas it sets out to explore really have any time to evolve beyond a few lines of profound-sounding dialogue blurted out in the first act. Character development gets the same short shrift as the thematic material. Most of the secondary characters seem wedged into the script by force—especially those played by frequent Nolan collaborators Morgan Freeman and Cillian Murphy. And the number of groups and individuals battling Will Caster reaches an absurd level in the third act, with the military, the FBI, a terrorist group, and a handful of computer nerds all throwing their hats into the ring. The two main characters, Will and Evelyn, are the most multidimensional, though their motivations become increasingly opaque and irrational as the film unfolds. In the end, Transcendence is too ambitious for its own good. Maybe one day Wally Pfister will release a 210-minute director’s cut that does its subject matter and characters some justice. – ★★ 1/2 THEIR TAKE This is a frustrating film on nearly every level: it unsuccessfully tries weaving too many plotlines into one cohesive narrative, and it sticks the viewers with a gaggle of unsympathetic characters. Its only saving grace is its stylish cinematography and above-average special effects. Couples would be wise to skip this clunker and save their date-night screening for something more satisfying, such as Spike Jonze’s masterful examination of artificial intelligence and romance, Her, or even some old bootlegs of Max Headroom. Read more movie reviews from the Critical Couple.
BY:
Grouber