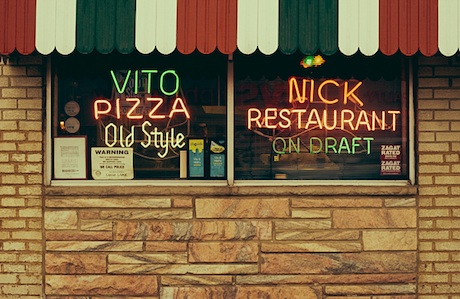 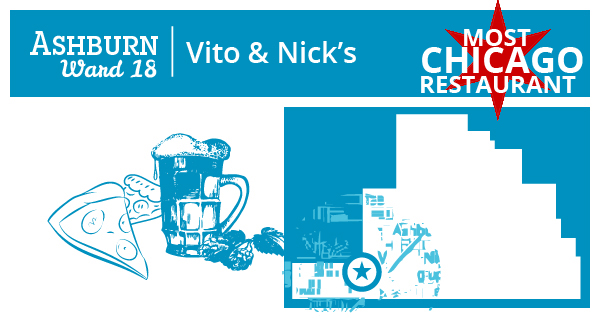 Pizza is serious business in Chicago. “Best of” debates usually include heavyweights (literally) such as Giordano's and Gino’s East, but many who prefer a lighter pie profess a die-hard love for Vito & Nick's (8433 S. Pulaski Rd.). The restaurant doesn't deliver, and it's a trek for those living north of Madison Street—but one well worth taking if you want a square slice of Chicago history. The 18th Ward sits on Chicago’s Southwest Side, fenced in by 87th Street on the south and extending roughly up to Marquette Park on the north. According to NBC’s Ward Room, it is a medley of the Ashburn, Wrightwood, North Beverly, Scottsdale, Auburn Gresham, and Parkview neighborhoods, and it is home to the Chicago thin-crust institution that is Vito & Nick’s. I got to sit down and break bread (OK, pizza) with owner Rose Barraco-George and learn what makes this place so special in a city ruled by deep dish. A Family Affair

From the old framed portraits hanging in the wood-paneled dining room to the lineage of names etched into the sidewalk cement in front of the restaurant, it is clear this Pulaski Road pizza joint is fueled by family history. This history spans five generations, from paterfamilias Vito Barraco, who emigrated from Italy with his wife, Mary, to his great-great-granddaughter, who waits tables today. Vito and Nick were a father-son team, and the current owner, Rose, is Nick’s eldest daughter. Now in her 90s, Aunt Lee—Nick’s sister and longtime waitress—is still a fixture in dining room. Rose joked that, to get Lee off her feet after decades of serving, she “promoted her to a position in PR.” The recipes used in the kitchen are the same ones used by Mary when the family first added pizza to the menu in 1946. The Pizza Those recipes are, of course, a tightly kept secret. When asked about ingredients, Rose refused to reveal anything. She did, however, let me step into the inner sanctum of the kitchen to watch Moe, one of the cooks, build a pie. 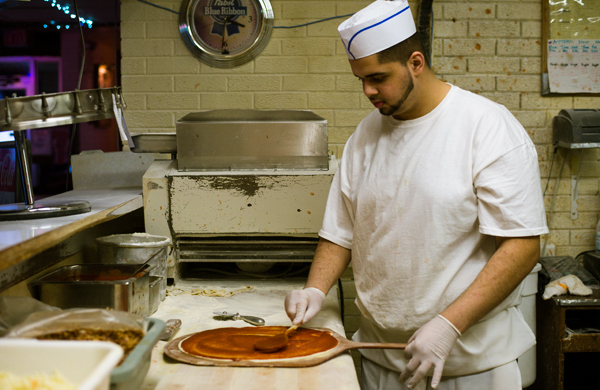 First, a ball of secret-recipe dough takes two passes through a motorized rolling machine to get its “cracker-thin” crust—a thinness that could never be achieved with hand tossing. The resulting oval is hand-trimmed down to a neat circle, then slathered with secret-recipe tomato sauce. Next comes a sprinkling of cheese and nubs of fresh sausage, which is “made to spec” by an outside company according to—yes—another secret recipe. After sliding the pizza into the oven, Moe and Rose demonstrated their Pike Place Fish Market–style method of chucking the pizza board back to the start of the line. A loud bang on the metal counter signals to anybody in the line of fire to duck. The pizza board zips through the air, and its handle lands in the catcher’s hand with a satisfying wood-on-flesh thwack. As the pizza baked to a well-done golden brown, Rose offered me a fistful of roast beef to sample. I will never say no to a fistful of beef. Besides the obvious sandwich application, these tender, rosy-in-the-middle slices are sprinkled on top of an italian-beef pizza that a certain spiky-haired TV host dubbed a “manhole cover in Flavortown.” Rose pointed out that just about everything used in their kitchen is either housemade or made to specification from their own family recipes. The restaurant has trusted many of the same suppliers for decades because “loyalty goes a long way,” her father told her. For years, the tomatoes have hailed from Stanislaus Food Products, a family-run operation out of Modesto, California, that’s been canning fresh tomatoes since 1942. The mozzarella cheese comes from Joliet’s Mancuso Cheese Company, founded by Santo Mancuso in 1907. Heck, even the laundry service, DeNormandie Towel & Linen, has been around since 1903. A Word from Some Regulars To get an idea of what folks from the area think of Vito & Nick’s, I called up Bob and Diane Anderson, who I know through their son, Mark. They moved into one of the neighborhood's ubiquitous yellow-brick bungalows on 84th Place in 1973. They knew the restaurant as a friendly spot frequented by city workers—cops, firefighters, and the like. It was the place to bring relatives from out of town because “you just couldn’t get pizza that good in Detroit” (sorry, Motown). A large sausage pie was the Andersons’ standard order. Bob remembered Nick as “a hard-working guy—a guy working hard for his family.” Mark remembered getting by on a balanced diet of Vito & Nick’s pizza bread and beef sandwiches after school and possibly smoking his first cigarette from a pack of Newport Lights procured from the vending machine next to the jukebox. Although Bob and Diane have since retired and moved out to the southwest burbs and Mark has moved up north, they still return to Vito & Nick’s to catch up with friends from the area and tuck into a sausage pizza. A Pizzeria by Any Other Name You’ll hear many an Ashburnite, including the Andersons, refer to this place as “Nick & Vito’s.” Although it does roll of the the tongue nicely, this was never the official restaurant name. When pressed for an explanation, Rose said that she thinks this became the moniker to some because Nick was the guy everyone saw around the restaurant. 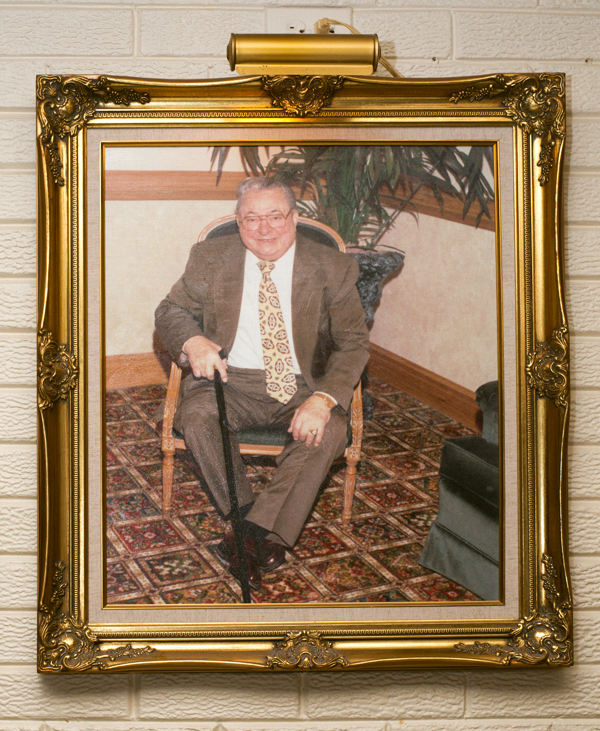 Vito had retired with the change of locations in 1965, so even though he had top billing on the neon Old Style sign out front, he just wasn’t around as much. Knowing people referred to it both ways, Nick smartly listed the restaurant as both “Vito & Nick’s” and “Nick & Vito’s” in the phone book. It should be noted that the Ashburn Vito & Nick’s is not affiliated with the multistate outposts of Vito & Nick’s II or the frozen pizzas bearing that name. As is often the case when business and family mingle, there have been a few litigious bumps in the road. In this case, the restaurant name was sold to franchisees outside the family, whose use of it Rose has disputed. She maintains that with the closing of the Lemont location, the restaurant at 84th and Pulaski is the one and only place to dine on her family’s original recipes. What You Need to Know 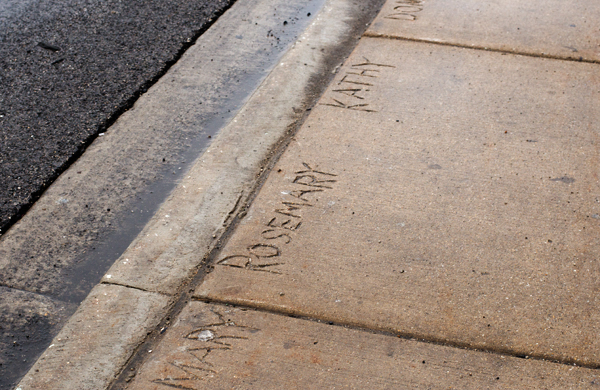 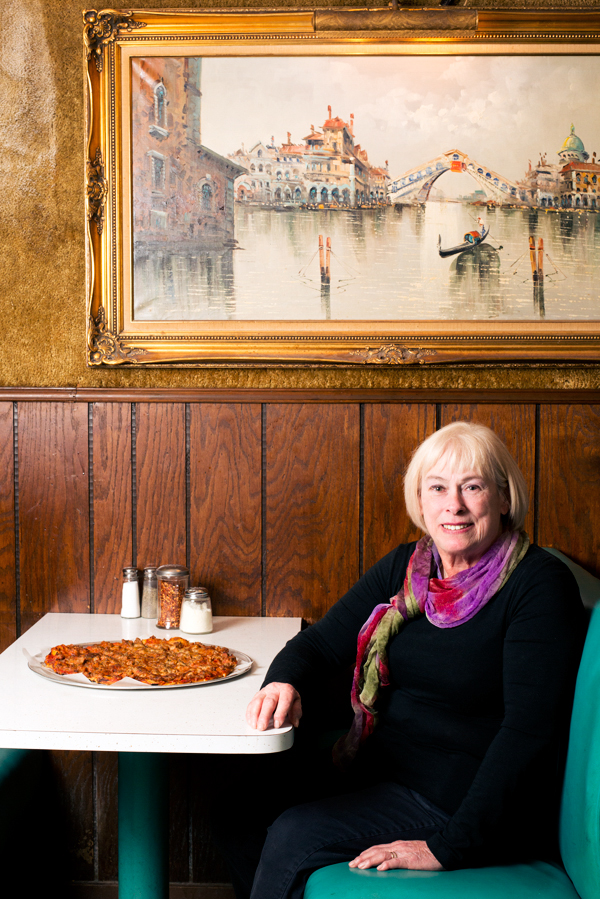 Raised in Minnesota and schooled in Wisconsin, Anna is now a well-traveled eater and amateur bassoonist.