The Savory Science of Sour Cream

When Jose Valdez Caballero started daubing sour cream onto the enchiladas of Dallas’ El Chico Restaurant chain in the 1950s, he likely didn’t imagine he was starting a revolution. After all, he was probably just channeling inspiration from his neighbors: the condiment, not yet a staple of Mexican cuisine, was already well-known to Dallas’ heavily German population. Nonetheless, with a few well-placed dollops, Caballero—who’s also credited with inventing the hard taco shell—helped influence restaurant menus across the country. But though most of us are familiar with the rich flavor of sour cream mingling with our burrito fillings, exactly how it achieves that distinctive flavor is less well-known.

What is Sour Cream, Exactly?

Sour cream starts its life as light cream, the layer of butterfat that rises to the top of not-yet-homogenized cow’s milk about 12 hours after it’s milked. Originally, dairy farmers would let the fresh cream sour on its own, allowing naturally occurring acids and bacteria to furnish its signature thick viscosity and piquant flavor.

Since demand has grown, however, dairies have developed a more mechanized process that’s faster to produce and safer for consumers.

1. Separation. Once the light cream forms on top of the milk, the liquid enters a centrifuge—a rapidly rotating container that separates the cream from the milk in the same way a tilt-o-whirl separates adults from their dignity.
2. Pasteurization. The freshly separated cream heats up to about 280°F for two seconds, killing detrimental bacteria without heavily affecting taste or texture.
3. Souring. After the bad bacteria is gone, dairies infuse the cream with good bacteria (via lactic acid), which meddle with the cream’s molecular structure until it possesses a whole new texture and flavor.
4. Cooling. As this transformation takes place, the condiment chills for 12 to 48 hours, depending on the preferred level of sourness.

Before adding final thickening agents such as gelatin, dairies will once again pasteurize the cream to stop the souring process and lock in the distinctive tanginess that enhances baked potatoes, tacos, and stroganoffs.

How to Sound More Authentic When Ordering Mexican Food A Tamale That Shucks the Cornhusk 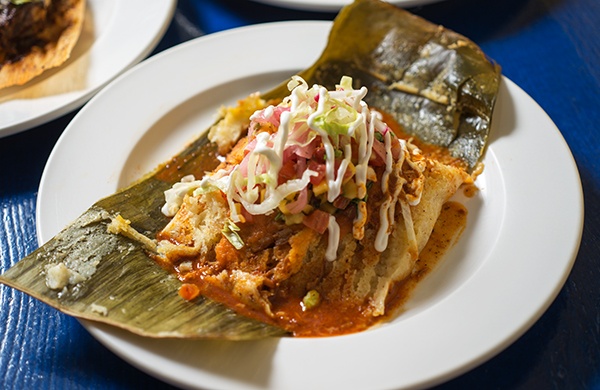