An Epic Road to Visit 21 Michigan Breweries in 200 Miles

If the Mitten State was an actual mitten with an actual hand in it, we'd want to high-five it. In the southwest quadrant of the state alone, there are nearly two dozen craft breweries, many of which lay claim to some of the nation's most renowned beers.

Here, we've outlined a three-day Michigan road trip that allows you to hit 21 Michigan breweries about 200 miles—which takes just a tank of gas. (And thanks to to-go growlers at every single brewery, it's a drive you can make 100% soberly.)

Brewers since before it was legal: Ypsi Alehouse is helmed by a Michigan microbrew pioneer: co-owned Ted Badgerow open a brewery in the early 1980s, a full decade before Michigan laws allowed beer to be sold on the same premises as it was brewed.

Deal: $28 for brewery tour for two, with two pints and a growler at Salt Springs Brewery ($43 value)

Blessed brews: This brewery serves its microbrews inside of a former church, circa-1899. It doubles as a restaurant, with mussels, ducks, and flatbread dishes enjoyed under the church's stained-glass window.

What to drink: Sister Ester's Saison and Heavenly Hefeweizen

Deal: $15 for $22 worth of ales and lagers at Brewery Becker

Beer with a bellhop: Tucked inside a historic hotel from 1873, Brewery Becker specializes in cask-conditioned ales. Grab a pint inside the building or take it outside to the award-winning biergarden.

Deal: $18 for two pints and one growler at Tecumseh Brewing Company ($30 value)

He's made everything: Tecumseh Brewing Co. head brewmaster Tim Schmidt has crafted 45 highly rated beers while curating a beer list with 200+ options, including in 160 different styles.

Grand Rapids is blowing up thanks to its beer scene—USA Today called it America's Best Beer Town, and we named it the No. 1 place to visit in the United States in 2015.

Small-town brewery: Need a break between Kalamazoo and Grand Rapids? OpenRoad Brewery offers a rotating series of brews, located in the small town of Wayland, halfway between the two microbrew-friendly cities.

Fan favorite: Founders' motto may be "brewed for us," but the brewery's beers are loved by many others, including judges at the Great American Beer Festival and the hundreds of people who purchase tickets for KBS Week each year. As Michigan beers go, you won't find a better brew than Founders All Day IPA.

Overachievers: Since opening in 1985, Bell's has amassed plenty of honors—including being named one of RateBeer's Top 10 Brewers in the World. Pair the award-winning beer with food from Bell's Eccentric Café. It's indisputably one of the best Michigan Breweries.

Old World meets New World: Housed in a former funeral chapel, the LEED-certified facility is reminiscent of a Belgian monastery, which is fitting, considering its specialty: Belgian- and French-inspired beers.

Take me out to the brewery: This Victorian-era firehouse is now a brewery and pizzeria decorated with vintage baseball decor. Before grabbing a seat in the taproom, check out the Tiger Stadium seats in the waiting area.

A pint and a pie: Draft beers and award-winning wood-fired pizzas have made this friendly Eastown brewpub so popular that they're adding a second location. The 300-seat, 30-tap "wonderland of beer," dubbed Harmony Hall, is expected to open in spring of 2015.

The comeback: Prohibition brought this brewery's first run to a halt until its reopening in 2012. Since then, it has enjoyed quite a renaissance, becoming the first USDA-certified brewery in the state.

Tours? Yes; $10 and a reservation earns guests tours on Saturday and Sunday 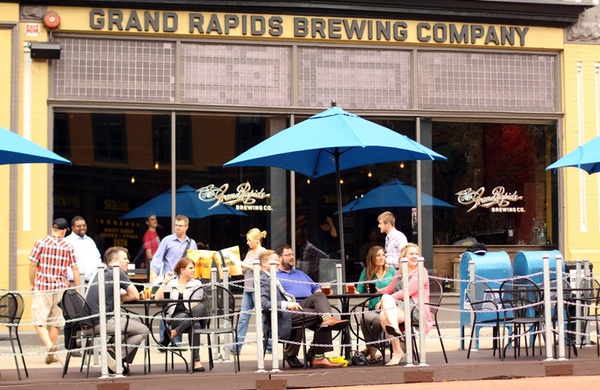 Parlor games: At this speakeasy-like space, you can play chess or classic video games while trying to choose from a rotating selection of more than 100 brews.

A drinkable feast: Considered one of the best craft-beer bars in the country, HopCat has received countless accolades since opening in 2008. While sampling from its 49 taps and 250-bottle list, try some of the beers made at its own small-batch brewery.

What to drink: Oil Rigger, Sage Against The Machine, Hoppopotamus

Three towns in one day might seem like a tall order, but Grand Haven's Old Boys' Brewery is open until midnight on the weekends. You can do it.

Deal: $19 for two tasting flights and one growler at Ridge Cider Co. ($33 value)

Cider Up to the Bar: Craft cider is a growing trend, and nowhere is better situated to capitalize on it than apple-centric Michigan. This rural cidery a short drive north of Grand Rapids is as charming as a winery, with a 100+ year old reclaimed barn.

A spirited brand: Not content to rest on its laurels, one of Michigan's most popular breweries took on the challenge of distilling spirits within a decade of opening. Its efforts have paid off, as New Holland Artisan Spirits have begun to rake in awards.

B(rew)YOB: Yup, you can brew your own beer here (though by reservation only). Many visitors use the 12–15 Saugatuck beers on tap as inspiration for their own creations.

"Small on purpose": Community is important in this cozy downtown brewery, where locals and out-of-towners alike are invited to pull up a bar stool and chat about experimental brews flavored with pickles, peanut butter, and coconut.

Strip-mall surprise: Not exactly where you'd expect to find a microbrewery, but Big Lake's strip-mall space belies their passion for producing classic beer styles. Owned by a pair of homebrewers and a winemaker, the trio's brews and fruit-infused wines are far more traditional than their storefront.

Earn your own mug: By opting into an annual or lifetime membership, you get to decorate your own mug and fill it with discount beer on each visit. The display of colorful mugs matches the funky decor as well as the unusual flavor combinations in the complex brews.

Roll dogs: Old Boys' is nothing if not loyal. In addition to using Michigan products in much of its pub fare and all of its beers, the brewery was named in memory of the owner's chocolate lab.

This article was originally written by staff writers Molly Metzig and Shannon Jewitt in 2015. It has since been updated.