Deluxe Attractions Passes or Party for 10 at Urban Air Adventure Park - Sacramento (Up to 48% Off).

4.4225 Groupon Ratings
4.4
Average of 225 ratings
67%
16%
8%
4%
6%
100% Verified Reviews
All Groupon reviews are from people who have redeemed deals with this merchant. Review requests are sent by email to customers who purchased the deal.
D
Dena
19 ratings12 reviews
The kids had a ball. Staff was great! Devon was our party host and he was great!
Helpful
E
Eboney
20 ratings17 reviews
The staff was very friendly and they walked us through the process. The kids had a ball and they still talk about the venue.
Helpful
J
john
9 ratings1 reviews
The Groupon was not worth it
Helpful
O
Oksana
18 ratings16 reviews
We haven’t even had the party yet and I would never do business with these people again! Just trying to book the bday was a nightmare, I was transferred back and forth from one place to the next - the minute they heard Groupon that was it - their whole attitude changed and they didn’t want anything to do with me! So yeah think long and hard before buying the Groupon!
Helpful
S
Simran
2 ratings2 reviews
Great place to take kids! Lots of things to do :)
Helpful
See all reviews
Earned when a user has written 5 or more reviews
Want to earn this badge? Share 3 or more photos
Earned when a user has gotten 2 or more helpful votes

Promotional value expires Mar 31, 2020. Amount paid never expires. Must sign waiver. Younger than 18 must have guardian-signed waiver. Deluxe attractions passes are for walk-in customers only. Purchasers can upgrade to the ultimate or platinum pass at the park for an additional fee. Urban Air Socks required; available for purchase for $2.50 per pair. Reservation required for birthday party option. Not valid for existing party reservations. May upgrade party or add jumpers for an additional fee. Valid only at Sacramento location. Limit 1 per person, may buy 2 additional as gift(s). May be repurchased every 90 days. Limit 1 per visit. Subject to availability. Must use promotional value in 1 visit(s). Valid only for option purchased. Merchant is solely responsible to purchasers for the care and quality of the advertised goods and services. Learn about Strike-Through Pricing and Savings

Kids often drive their parents up the wall, but at Urban Air Trampoline & Adventure Park, they can climb up the walls alone. At locations across the country, trampolines line the floors and walls of enormous open spaces, providing several zones for visitors to jump, flip, and fall softly into hunks of foam or a giant airbag. Activity areas may vary at each location, but they range from the Apex—a wide, sprawling space for freeform leaping—to the Bowl—a narrow pit designed for plenty of off-the-wall mayhem.

Many parks also have spaces for toddlers to venture out safely as well as slam-dunk arenas and dodgeball courts, where both kids and adults can compete in familiar games without being weighed down by gravity's boring rules. Some parks also include the Urban Warrior Obstacle Course with unique lanes testing speed, agility, strength, and stamina. Guests can also test their balance and strength on the Warrior Battle Beam at several locations, and many parks include the latest Tubes Attraction to bring the playground experience to a whole new level for kids 9 and younger.

This rich variety of activities has earned Urban Air Trampoline & Adventure Park a bevy of attention and awards, including back-to-back "Best Trampoline Park" wins from Fort Worth Child magazine and a mention as one of Shape magazine's "Coolest Clubs in America."

Beyond the everyday action, some nights see the trampolines glow with neon lights as DJs spin, while toddlers take over the entire park on certain mornings for pre-school jump sessions. Groups can also reserve the trampolines for special events and parties, whether they're celebrating a kid's birthday or having a team-building workshop or team event.

In and Around Sacramento 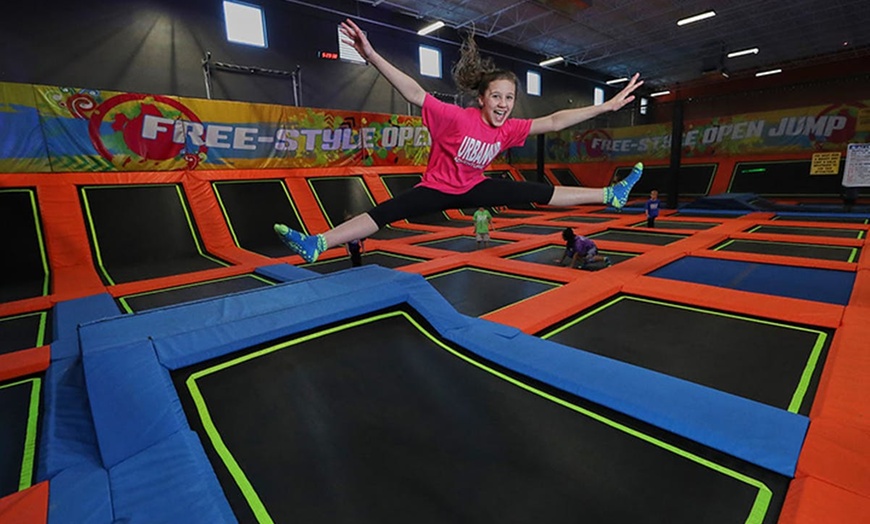 100% Verified Reviews
All Groupon reviews are from people who have redeemed deals with this merchant. Review requests are sent by email to customers who purchased the deal.
Customer support
Help Center
Refund Policies
Report Infringement
Sell on Groupon
Join Groupons Marketplace
Run a Groupon Campaign
How does Groupon work for Merchants
Sponsor your Campaign
Affiliate Program
Vendor Code of Conduct
Company
About
Jobs
Students
Press
Investor Relations
Management Team
In Your Community
Quick Links
Treat yourself
Things to do
Coupons
Gifts for Occasions
Follow Us