How to Eat a Whole Fish 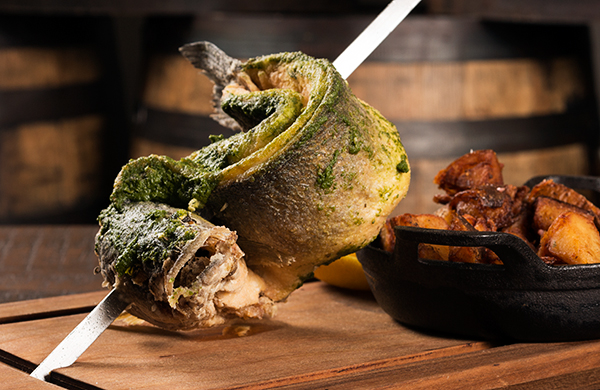 “It’s not about small plates—it's about dinner,” said Mantuano, also the acclaimed creator of Chicago’s Spiaggia.

He’s referring to the kind of old-fashioned dinner that gathers a family around the table to enjoy a centerpiece Sunday roast. It's a concept that's becoming popular across the country as more and more menus favor rustic simplicity over “fussy” modernism.

River Roast serves three such rustic whole-animal meals: chicken, beef, and fish. Of those three, it's maybe seeing the whole fish—head, tail, and all—land on the table that's most daunting to many diners. But restaurants like River Roast go to great lengths to make the dish as approachable as possible despite the dramatic presentation.

River Roast prepares its whole fish two ways: roasted or fried. Both preparations use spigola, a Mediterranean sea bass from Greece also known as branzino. A masterful butcher painstakingly debones each fish, removing the spinal column and all pin bones to make it as easy as possible for guests to eat. Before being roasted, the fish is bathed in an aromatic salsa verde made with mint, basil, parsley, lemon, anchovy, mustard, and garlic. (The fried version is brushed with the same sauce just after it comes out of the fryer.) The vibrant sauce lends both color and herbal tones to the fish.

Next comes the most important step: the roasting itself. “It’s the vehicles that prepare the roasts that make them so special,” Hogan said. For the whole roasted fish, that vehicle is a specially made tandoor oven.

“I don’t think there’s anything that gets more of a char on that fish than that tandoor oven,” Mantuano said. The fish is cooked in a custom-designed basket, its perfect fit ensuring just the right level of roasted flavor on the skin. 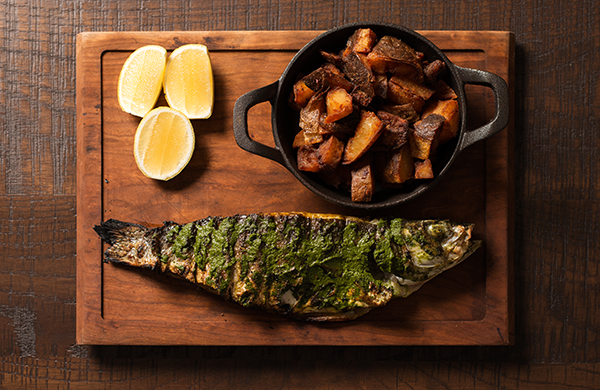 Here are a few tips from Mantuano and Hogan on eating a whole fish.

Take off the head first

“The closest to the head is always the sweetest meat,” Hogan said. “We encourage people to grab the head and go after it.”

Don’t miss the cheek and collar

Start with the delicate meat around the collarbone, and then move on to the cheek. It can be a little more difficult to get to the cheeks on smaller fish, like the sea bass at River Roast, but it’s worth it. “Typically, the cheek meat is where the really succulent, delicious meat hides.” Hogan said.

“If there were just collar and cheeks, I’d be a happy man,” Mantuano said. “They’re the most flavorful and the most moist.”

Use the tail as a handle

Pull off the tail and eat the meat at the end of the fish, which frees up the rest of the fillet.

Dig into the fillet piece by piece

When fillets are completely boneless, it’s easy to peel pieces of fish away with your fork without moving the body of the fish on the plate. For fish that are aren’t as thoroughly deboned, this is also a good way to make sure your bite doesn’t have any bones in it.

Don’t be shy with the lemon juice

Think of it as seasoning. “You can never have enough lemon juice on whole roasted fish,” Mantuano said.

Read more about getting back to rustic cooking: