The Allman Brothers Band Museum at the Big House Visit or Membership (Up to 54% Off). Five Options Available.

5.0163 Ratings
5.0
Average of 163 ratings
98%
2%
100% Verified Reviews
All reviews are from people who have redeemed deals with this merchant. Review requests are sent by email to customers who purchased the deal.
staff
museum
band
tour
display
experience
music
volunteer
employees
Filter Aspect List
J
Joe
5 ratings4 reviews
It's an awesome place for anyone who likes the Allman Bros. You will become a bigger fan afterwards. The volunteers there are awesome and knowledgeable.
Helpful
J
Jeff
4 ratings2 reviews
Well worth the time, travel and expense! The museum has many musical artifacts and the self-guided tour sort of makes you feel like one if the "brothers" for a day! Very worthwhile.
Helpful
R
Rita
10 ratings3 reviews
This place is wonderful!
Helpful
T
Tracy
1 ratings1 reviews
Kind people who really can identify with fans who love ABB! It’s a must-see!
Helpful
K
Karen
3 ratings3 reviews
Great museum! A must for any Allman Brothers fans- the memorabilia was awesome! Both employees that we met and talked with were also great and gave us other sites to visit while we were there. Each room in the house is filled with display cases and tons of info that we enjoyed. Will go back and visit again the next time we are in Macon.
Helpful
C
Cindy
4 ratings3 reviews
Love the place so much history on the Allman Brothers
Helpful
J
James
8 ratings7 reviews
If you enjoy music history and one one of best groups ever you will enjoy this tour through history
Helpful
M
Mary
18 ratings4 reviews
Amazing compilation! A MUST SEE!
Helpful
See all reviews
Earned when a user has written 5 or more reviews
Want to earn this badge? Share 3 or more photos
Earned when a user has gotten 2 or more helpful votes

Music is a force powerful enough to calm a baby, soothe a wild beast, or compel the two to dance with each other. Be overcome by this voucher.

Promotional value expires 180 days after purchase. Amount paid never expires. Not valid on special events. Limit 1 per person, may buy 1 additional as gift(s). May be repurchased every 30 days. Limit 1 per visit. Valid only for option purchased. Merchant is solely responsible to purchasers for the care and quality of the advertised goods and services. Offer is not eligible for our promo codes or other discounts. Learn about Strike-Through Pricing and Savings

About The Allman Brothers Band Museum at the Big House

“This was a crazy, insane house … basically a frat house, but to the 10th degree,” Conan O’Brien said of The Big House while interviewing Gregg Allman in May 2012. “Now, they’ve turned that house into a museum!” he marveled. The talk-show host and his legendary musical guest joked about how much work that must have taken. “To refurbish it, man, you just about have to jack that one up and roll a new one under it,” Gregg said, chuckling.

Although the three-story, Tudor-style building has certainly been cleaned and restored, it’s still the same place where many founding members of The Allman Brothers Band—with their family and friends—lived and played their iconic music. Drawn to Macon by a contract with Phil Waldren Records, Berry Oakley and his wife, Linda, first rented the Big House in 1970, less then a year after the band formed. Guitarist Duane Allman and his brother Gregg joined the couple, and soon a rotating cast of characters was coming in and out of the high-ceilinged rooms. Past the first floor’s parlor and through the french doors, a sunroom became the music room where the band would, in Berry’s words, “hit the note,” and the kitchen and backyard became fertile spaces for songwriting. But tragedy struck the band before long: in 1971, Duane died in a motorcycle accident, and in 1972, Berry died in another. The remaining family moved out soon after.

Today, the Big House showcases Duane’s 1975 Gibson Les Paul Goldtop guitar—which he played with more than half the time—and other instruments, handwritten song sheets, gold records, show contracts, and other band memorabilia. The room where Duane lived is preserved the way it was when he lived there in the 1970s complete with a leather jacket hanging in the closet. 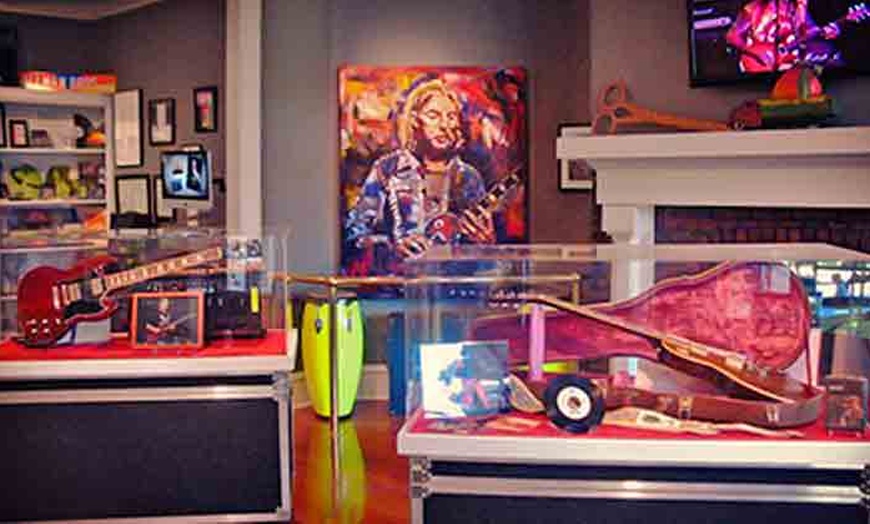 The Allman Brothers Band Museum at the Big House Visit or Membership (Up to 54% Off). Five Options Available.

100% Verified Reviews
All reviews are from people who have redeemed deals with this merchant. Review requests are sent by email to customers who purchased the deal.
Close
Grouber