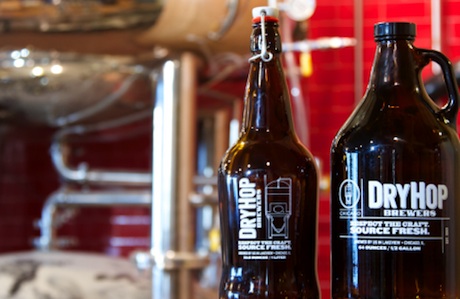 A friend of mine once claimed that sharing a growler is the first important thing one shares in a relationship. You know, before sharing a pet, living space, or life together. This new year, whether it be with friends or a significant other, practice the importance of sharing, especially that of delicious local microbrews. And while you’re at it, why not throw in some take-out? Here are a few suggestions. Piece Brewery and Pizzeria (Wicker Park | 1927 W. North Ave.) 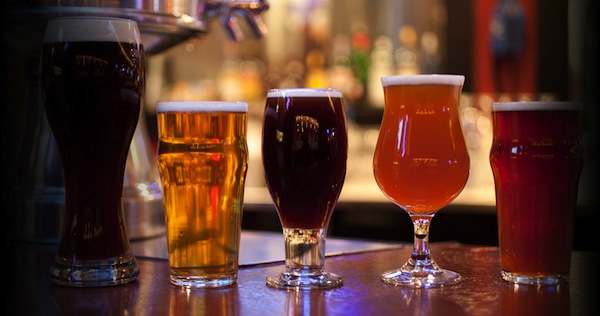 During a totally informal survey of where friends and coworkers had purchased growlers, Piece came up every time. That’s probably because not much beats its Sunday special: a large pizza and a growler for $25. Keep in mind, that pizza includes unconventional yet tasty toppings, such as clams and mashed potatoes. For more than pizza, check out Penny’s Noodle Shop or Lillie’s Q. Cost of 64-ounce growler: $4 // Cost of growler fill: $16+ // Accepts growlers from other breweries: No Half Acre Beer Company (Northcenter | 4257 N. Lincoln Ave.) Although this brewpub doesn’t serve food, it offers just about everything else, including WiFi, coffee, soda, and 11 beers on tap, ranging from classics (Daisy Cutter pale ale) to seasonal brews (Big Hugs imperial stout). It also offers growlers in two sizes: 32 and 64 ounces. On Tuesdays, the 32-ounce growler fills are $1 off, and 64-ounce growler fills are $2 off. For take-out, grab a burger right across the street from The Bad Apple, or venture a bit farther for pub food from The Grafton. Or mix it up with Korean barbecue from Cho Sun Ok Restaurant. Cost of growler: 32-ounce, $4; 64-ounce, $4 // Cost of growler fill: 32-ounce, $7–$10; 64-ounce, $12–$22 // Accepts growlers from other breweries: Yes

Begyle Brewing (Ravenswood | 1800 W. Cuyler Ave.) If the city’s liquor-license contingent abides, Begyle should have its liquor license by the second week of January 2014. Once it does, the brewery will begin selling community-supported brewery memberships, which are similar to a CSA, but with beer. If you’re not ready for that commitment, however, stop by Wednesdays through Sundays for 32- or 64-ounce growlers or a 2-liter swing-top container. Nearby, check out Always Thai, Latin cuisine at Melao, or pub food at Brownstone. Cost of growler: 32-ounce, $4; 64-ounce, $4; 2-liter, $25 // Cost of growler fill: 32-ounce, $7–$8; 64-ounce, $12–$15, 2-liter swing-top, $12–$15 // Accepts growlers from other breweries: Yes, if they meet the brewery’s inspection standards Rock Bottom Restaurant and Brewery (River North | 1 W. Grand Ave.) Although it’s the largest chain among the Windy City’s growler providers, Rock Bottom still offers a healthy dose of local, high-quality craft beer, with a total of 700 original brews. And it’s not just about quantity here, but quality. Its beer has won more than 125 medals and awards, several of which went to the brewmaster at the River North brewpub. The restaurant and brewery offers 64-ounce growlers as well as a selection of American fare. For take-out, there’s Italian at Quartino or mega-Italian at Eataly. Cost of 64-ounce growler: $3 plus tax // Cost of growler fill: $13.50–$18 plus tax // Accepts growlers from other breweries: No, but if you’re lucky maybe Horse Thief Hollow (Beverly | 10426 S. Western Ave.) 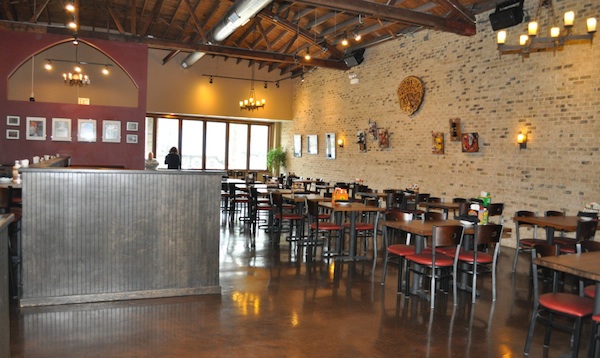 Decorating a Christmas tree is part of many people’s holiday traditions. The staff at Horse Thief Hollow puts a twist on that tradition by assembling a growler tree, complete with a tree topper. Beer drinkers can aim to emulate the Beverly brewery’s holiday spirit by collecting its growlers, which can be filled with brews such as Wasserwolf, an English brown ale, and Uncorked, a Belgian tripel. Guests can complement the brewery’s sweet-potato brown ale, Cheval Deux, with a dish from Jimmy Jamm Sweet Potato Pies or head to Cork & Kerry to pick up Irish pub food. Cost of 64-ounce growler: $5 // Cost of growler fill: $12–$16 // Accepts growlers from other breweries: Yes Goose Island (Lincoln Park | 1800 N. Clybourn Ave.; Wrigleyville | 3535 N. Clark St.) Goose Island may be Chicago’s most well-known brewery outside the city (and even state)—and with good reason, since it’s been around the longest. The brewery opened in 1988, when American craft brewing was just a baby. Now, all grown up, its two brewpubs provide the city with a variety of local ales and lagers, all of which are available to take home in a growler (Note: no to-go brews are offered on game days at the Wrigleyville location). Stop by on a Thursday and take home a freshly tapped brew, along with a koozie for growler accessorizing. Then, pick up take-out nearby. Near the Clybourn location, classic American food abounds at restaurants such as Epic Burger and Franks 'n' Dawgs. Cozy, a Thai restaurant offering noodle and rice dishes, is close to the Wrigleyville location, as is El Burrito Mexicano, or, as I like to call it, “the burrito place underneath the Addison Red Line.” Cost of 64-ounce growler: $4 // Cost of growler fill: $16–$24 // Accepts growlers from other breweries: Yes

Revolution Brewing (Logan Square | 2323 N. Milwaukee Ave.) We’d recognize that clenched fist anywhere, but most notably on each of the 14 taps at Revolution Brewing. The Logan Square brewpub played host to several scenes in this year’s rom-com Drinking Buddies, and it’s the perfect place for local drinking buddies. However, because it has such a great atmosphere and doesn’t take reservations, the pub can have a long wait. No need to wait, though. Stop by on a new-beer-release Wednesday and grab a brew, then walk to Taqueria Moran and take home tacos or grab vegan or vegetarian fare at The Chicago Diner. Cost of 64-ounce growler: $4 // Cost of growler fill: $12–$32 // Accepts growlers from other breweries: No Haymarket Pub & Brewery (West Loop | 737 W. Randolph St.) Although Christmas Eve marked Haymarket’s third birthday, the brewery celebrates year-round with events ranging from live music to story slams. For hockey fans, it offers shuttles to the Blackhawks’ non-Saturday home games. There are a dozen brews to choose from, and numerous takeout options nearby, including diner dishes from Little Goat and charcuterie, artisanal cheeses, and fresh bread from Publican Quality Meats. Cost of 64-ounce growler: $5 // Cost of growler fill: Three times the cost of a pint, which comes out to about between $15 and $20 // Accepts growlers from other breweries: Yes, as long as they are clean DryHop Brewers (Lakeview | 3155 N. Broadway) 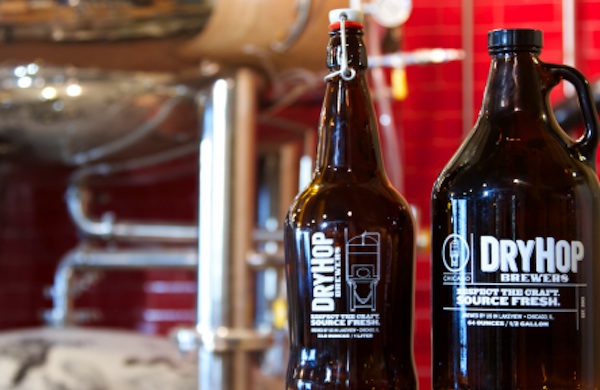 Less than a year old, DryHop is wise beyond its years, having collaborated with the likes of Intelligentsia Coffee and South Loop Brewing on limited-release beers. Its hop-centric mainstays pack a punch. And the brewpub does offer take-out, but if you'd like other options, there's soup at Soupbox, Korean chicken wings at Crisp, or Mediterranean at Falafill. Cost of growler: 32- or 64-ounce, $4 // Cost of growler fill: 32-ounce, $6–$9; 64-ounce, $9–$14 // Accepts growlers from other breweries: Yes Atlas Brewing Company (Lincoln Park | 2747 N. Lincoln Ave.) There was a time when this brewpub was just as mythical as the names of its beers. After graduating from college, John Saller worked a variety of dead-end office jobs before he picked up restaurant work along with homebrewing. After writing a business plan, he and his brother, Ben, opened Atlas Brewing Company in 2012. Today, the seven-barrel brewhouse churns out gallons of Atlas golden ale, Andromeda milk stout, and Acropolis wheat ale, among others. All of these are available in 68-ounce growlers, which guests can take home with brunch fare from nearby Batter & Berries or a deep-dish pizza from Gino’s East. Cost of 68-ounce growler: $4 // Cost of growler fill: $12–$22 // Accepts growlers from other breweries: Yes Photos courtesy of respective breweries Take your beer knowledge to the next level:
BY:
Customer support
Help Center
Refund Policies
Report Infringement
Sell on Groupon
Join Groupons Marketplace
Run a Groupon Campaign
How does Groupon work for Merchants
Sponsor your Campaign
Affiliate Program
Vendor Code of Conduct
Company
About
Jobs
Students
Press
Investor Relations
Management Team
In Your Community
Quick Links
Treat yourself
Things to do
Coupons
Gifts for Occasions
Follow Us