Kids' Summer Music Camps at Bach to Rock North Scottsdale (Up to 28% Off). Five Options Available.

Children can take part in a summer camp and hone their singing, dancing, and music skills

5.015 ratings
5.0
Average of 15 ratings
100%
100% Verified Reviews
All reviews are from people who have redeemed deals with this merchant.
S
Sheri
2 ratings1 reviews
The staff was amazing & so helpful! My 10 year old daughter & her 9 friends has an absolute blast with the karaoke party. I would highly recommend!!
Helpful
J
Jen
1 ratings1 reviews
The kids had a lot of fun. Every kid got to take home a CD of their session.
Helpful
C
CaseeTOP REVIEWERHELPFUL REVIEWER
18 ratings5 reviews
My 17 year old loves her new voice coach & lessons.
Helpful
A
Amber
10 ratings2 reviews
We had a rock City party for our daughters 5th birthday and it was awesome!! The staff was great with the kids and wonderful with clean up 🎸👍😀
Helpful
T
ThelmaTOP REVIEWER
21 ratings12 reviews
My daughter has an awesome time
Helpful
A
AnTOP REVIEWER
9 ratings7 reviews
Kids love the rock city class! Staff is super friendly! The only negative thing I can say is that their waiting area is rather small! Show up early and no problem!
Helpful
B
Brady
11 ratings4 reviews
My 12 yr old daughter had a rock star bday party and had a blast! Alex and Pete were very helpful and patient. Highly recommend
Helpful
Earned when a user has written 5 or more reviews
Want to earn this badge? Share 3 or more photos
Earned when a user has gotten 2 or more helpful votes

Catchy Songs: How They Get Stuck in Your Head

Using MRIs, scientists have been able to pinpoint which parts of the brain a catchy song causes to “itch”—but there’s still no way to identify which elements of a song make it stick. Read on to learn more about why some songs just won’t leave your head.

You don’t need to be a neuroscientist to know that Rihanna is a master of mind control. The singer—or at least the producers and songwriters with whom she works—succeeds in part because her songs have a knack for burrowing into listeners’ heads whether they like it or not. But what is it about massive pop hits that appeals to the brain?

Knowing the precise answer to that question would put you in high demand, just like knowing which presidents were secretly left-handed. Consulting companies have attempted to assign “hit scores” to songs based on factors such as tempo, rhythm, and melodic structure, though there’s little data available on whether such algorithms have improved on record executives’ gut instincts. Radio stations often simply go straight to the public, asking survey respondents to rate songs based on 5- to 10-second recordings of each track’s hook without regard as to why the song works.

MRIs have shown which parts of the brain a catchy song causes to “itch,” although they can’t identify which elements of the song are responsible. Researcher and musician James Kellaris has conducted extensive surveys that suggest a few common qualities: repetition, simplicity of music and lyrics, and an element of the unexpected—such as an odd time signature or a note that suddenly soars above the rest—which may cause the brain to replay the song over and over in the attempt to reconcile the strange element with the sound it had been prepared to hear.

In his book Musicophilia, neuroscientist Oliver Sacks floats one hypothesis for why we got stuck with this feature of the human mind in the first place. Perhaps our brains are susceptible because it was advantageous for early humans to have bird calls, predators’ movements, and other important aural cues on involuntary repeat so that they could recognize them later—or even map their own location using their auditory surroundings instead of leaving a trail of animal bones everywhere.

Promotional value expires 120 days after purchase. Amount paid never expires. Reservation required. Limit 1 per person, may buy 1 additional as gift. Limit 1 per family. Valid only for option purchased. Not valid for week after Memorial Day (from May 30 to June 2). No repurchase. Merchant is solely responsible to purchasers for the care and quality of the advertised goods and services.

About Bach to Rock

In and Around Scottsdale 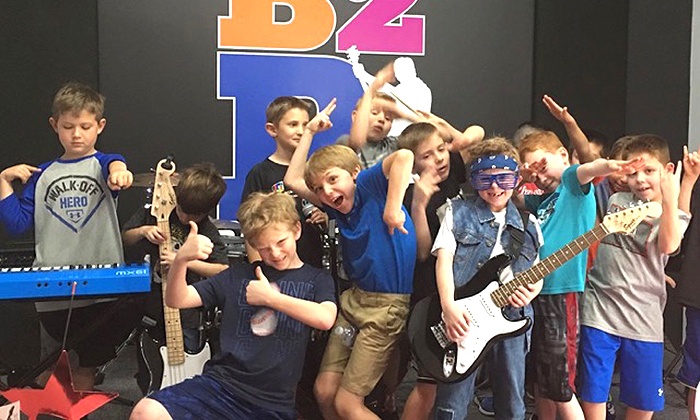 Kids' Summer Music Camps at Bach to Rock North Scottsdale (Up to 28% Off). Five Options Available.