For each option, choose between the game on February 27 or 28.

Magic Passes grant access to a special 30-minute exhibition of tricks and hands-on basketball fun with the players 90 minutes before the game; pass holders also get the chance to meet the Globetrotters and their mascot, Globie.

Since forming in the 1920s, the Harlem Globetrotters have continued to entertain millions of parents, children, and general basketball admirers with a trademark blend of athletic precision and razzle-dazzle showmanship. For the team’s 2015 tour, a rotating roster of Globetrotter favorites—including three female players—takes to the hardwood each game. Spectators might spot veteran guard TNT sharing a behind-the-back pass with dunker Thunder, who also holds the world record for longest basketball shot at 109 feet and 9 inches. The Globetrotters might also present a study in contrasts with 5-foot-2 Too Tall and 7-foot-4 Stretch, the team’s tallest member.

This season, the team faces off against its classic nemesis, the Washington Generals, whose head coach was also a member of the last Generals team to have beat the Globetrotters—more than 40 years ago. Each game gives the Globetrotters’ jovial jocks a chance to extend their decades-long dominance as youngsters laugh along and witness classic routines of unconventional passing and sudden transmutations of water into confetti. Over the years, similar antics have followed the Globetrotters around the world, including to 122 countries and territories and all six continents on which basketballs grow naturally. The Globetrotters’ extensive travels haven’t gone unnoticed: they’re one of the few teams to earn a spot in the Naismith Memorial Basketball Hall of Fame as ambassadors of the sport.

The basketball whiz and "Amazing Race" star runs down the Globetrotters' top stunts.

Expiration varies. Limit 8 per person. Valid only for option purchased. Redeem starting 11/3 for a ticket at the venue box office. Must show valid ID matching name on voucher at Ted Constant Center. Refundable only on day of purchase. Must purchase together to sit together. Discount reflects Globetrotter's current ticket prices-price may differ on day of the event. Doors open 2 hours prior for Magic Pass; 1 hour prior for regular ticket. Merchant is solely responsible to purchasers for the care and quality of the advertised goods and services. 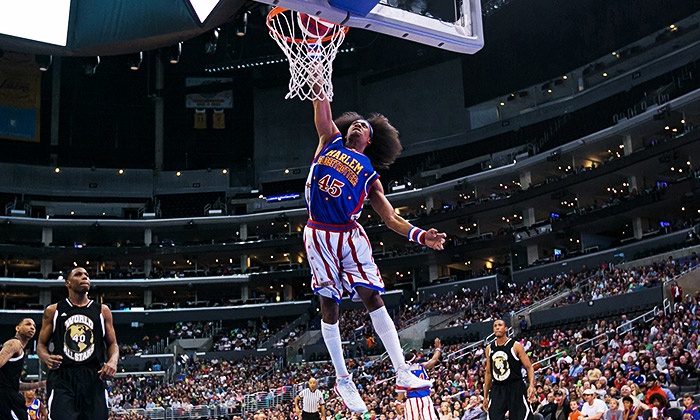