Hockey is the fastest paced of all major sports, because its players rush to complete the game before the ice field melts into vinegar. Enjoy the acidic thrill of competition with this deal.

Despite entering the 2014 playoffs as the 8th and final seed, the Admirals upset the top-ranked Manchester Monarchs in the first round and nearly toppled the eventual conference champs in the Conference Semifinals. This slate of early-season games includes back-to-back rematches against the Monarchs, who may be punished on the ice if they try wear their crowns during the contest. Other games feature division-rivalry showdowns against the Hershey Bears and the Wilkes-Barre/Scranton Penguins.

The Norfolk Admirals joined the AHL as an expansion team in the 2000–01 season. After qualifying for the playoffs nearly every season, the team’s historic 2011–12 campaign pushed them over the top and brought home their first Calder Cup. That year, the Admirals closed the season on a 28-game winning streak, the longest in the history of professional hockey since 1975, when brick walls were deemed ineligible to be goalies. Now an affiliate of the Anaheim Ducks, the Admirals still take to the ice at Norfolk Scope Arena and face off before crowds of up to 8,700 devout fans.

Expiration varies. Limit 8 per person. Valid only for option purchased. Use for admission at Scope Arena on day of event. Refundable only on day of purchase. Must purchase together to sit together. Doors open 1 hour before showtime. Merchant reserves the right to substitute closer seat assignment. For ADA accommodations, call Groupon customer service immediately after purchase - availability is limited. Holder assumes all risk in connection with the event and releases Groupon and its affiliates, Ticketmaster, the venue and their affiliates from any related claims. Not redeemable on mobile app. Merchant is solely responsible to purchasers for the care and quality of the advertised goods and services. 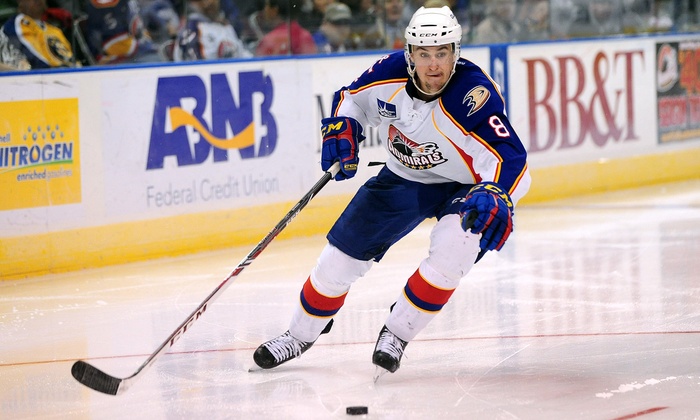