Ballet dancers spend an unusual amount of time on their toes, much like the coworker who creeps up behind your chair every day just to watch you for a while. Gaze at grace with this deal to see Wizard of Oz presented by Ballet Memphis at The Orpheum Theatre. Choose between the following seating options:

Additionally, choose from the following performances:

Doors open one hour before showtime.<p>

Ballet Memphis puts their own graceful pirouette on the Technicolor classic The Wizard of Oz, with choreography composed by company member and rising star Steven McMahon. Clad in her iconic blue gingham dress and ruby pointe shoes, Dorothy joins a group of unconventional friends to dance down the Yellow Brick Road in search of a heart, a brain, courage, and directions home. The performance is preceded by a set of variations from Act III of August Bournonville’s Napoli. The cheery tale of lost love reunited is regarded as a gem of the Romantic style.<p>

Though it’s gone by three names and flourished in as many forms, The Orpheum Theatre has maintained its reputation as a bustling cultural center and go-to destination for entertainment in Memphis. Originally a Vaudeville theater known as the Grand Opera House, the venue was destroyed and subsequently transformed by a fire in 1923. What rose from the ashes was The Orpheum, expanded and bequeathed with ornate accents such as brocade draperies, crystal chandeliers, and a giant top hat. In 1940, the Malco movie-theater chain took over to play first-run films for a younger generation before selling three decades later to the Memphis Development Foundation. Now restored to its original lavishness, The Orpheum Theatre beckons Broadway shows, concerts, and comedians to its sweeping stage year round.

Expiration varies. Limit 6 per person. Valid only for option purchased. Redeem for ticket at Ballet Memphis from 4/8-4/12. Must show valid ID matching name on voucher at Ballet Memphis. Refundable only on day of purchase. Must redeem together to sit together. Discount reflects Ticketmaster's current ticket prices-price may differ on day of the event. Doors open 1 hour before showtime. For ADA seating, call box office promptly upon receipt of voucher - availability is limited. Merchant is solely responsible to purchasers for the care and quality of the advertised goods and services.

About "Wizard of Oz" presented by Ballet Memphis

In and Around Memphis 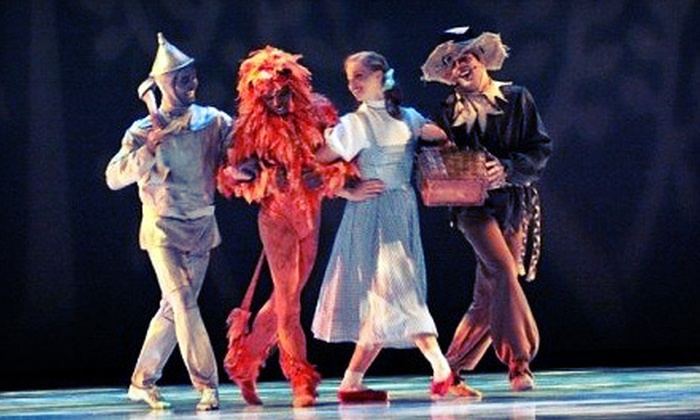