Humble Pie is a top merchant due to its average rating of 4.5 stars or higher based on a minimum of 400 ratings.

$20 Worth of Pizzeria Cuisine at Humble Pie

4.610,631 Ratings
4.6
Average of 10,631 ratings
81%
9%
4%
1%
6%
100% Verified Reviews
All reviews are from people who have redeemed deals with this merchant.
food
service
pizza
salad
pie
staff
price
crust
atmosphere
lunch
waiter
experience
fries
lunch specials
waitress
chopped salad
table
toppings
pricy
sandwich
M
Melodytop reviewer
64 ratings57 reviews
I have been coming to this location for several years and found new owners this time. They were friendly with a newly decorated restaurant and a new menu. My daughter and I both ordered the lunch calzone special which included our choice of a Caesar salad as a side. The food was great as always. There is outdoor seating on the adjacent patio for those not wanting indoor seating due to covid!
Helpful
K
Karentop reviewer helpful reviewer
49 ratings26 reviews
Great food great service
Helpful
S
Suetop reviewer helpful reviewer
24 ratings15 reviews
The BEST pizza and salad in Arizona!
Helpful
D
Doreen
47 ratings3 reviews1 photos
We LOVE Humble Pie, and this was another delicious visit! We have used numerous Groupons over the years, more times than I can even count, and it has always been one of our very fav places to go. Unfortunately, that has changed. We verified that they will no longer be offering Groupons, and even if you still have one, you can no longer use it during the express lunches. Looks like we are on the hunt for a new fav!
Helpful
R
RICHARDtop reviewer
20 ratings9 reviews
Food was good service was excellent
Helpful
L
LARRYtop reviewer
30 ratings11 reviews
Excellent service since the new management. Great food as always.
Helpful
F
Franktop reviewer helpful reviewer
93 ratings59 reviews
Pizza was excellent and service was very fast. Great for casual dining. I consider Hinble Pie one of the best pizza places around!
Helpful
T
Tara
14 ratings2 reviews
Love the food here. Our server wasn’t together. We had to get our own extra silverware/table settings. We said green peppers on the pizza. It’s comes out with no peppers, I reminded her green peppers, comes back with raw red peppers and my 9 year old niece says didn’t you want green.
Helpful
See all reviews
Earned when a user has written 5 or more reviews
Want to earn this badge? Share 3 or more photos
Earned when a user has gotten 2 or more helpful votes

Promotional value expires 90 days after purchase. Amount paid never expires. Not valid for Date Night and other specials. Cannot be combined with Kids Eat Free menu. Entire voucher value must be used in one purchase. Limit 2 per person, may buy 2 additional as gift(s). Limit 1 per visit. Limit 1 per table. Valid only for option purchased. Valid for dine-in only. Must purchase 1 food item. Not valid for happy hour specials. Merchant is solely responsible to purchasers for the care and quality of the advertised goods and services.

There's nothing humble about Humble Pie's pizza crust: Pulled from wood-fired ovens with a light, bubbly texture that crisps at lightly charred edges, it cracks to release a subtle aroma of smoke and yeast. For owner Tom Kaufman, the recipe demanded two months of tinkering and one month of building an underground vault to keep it from prying eyes. Customers tend to think the time was worth it as they bite into delicate slices topped with careful combinations of veggies, meats and cheeses, often locally sourced.

The potato-and-roasted-garlic pizza, for example, happily marries the fragrances of gorgonzola and rosemary. Retaining a botanical touch even on a meat-lover's pie, the Schreiners Sicilian Sausage sprinkles homemade mozzarella with "sprigs of roasted fennel [that] add another aromatic dimension," according to Phoenix New Times.

While the pizza may push some of the other menu items out of the limelight, fresh salads, grilled sandwiches, and traditional and twisted pastas earnestly pine for appetites' affections. The Our Way Mac & Cheese adds aged white cheddar, italian bacon, and bread crumbs, distinguishing itself from its boxed brethren while forming an equally fun medium for kids' art projects, while wine, beer, and seasonal cocktails pair well with plates and pies alike.

In and Around Phoenix 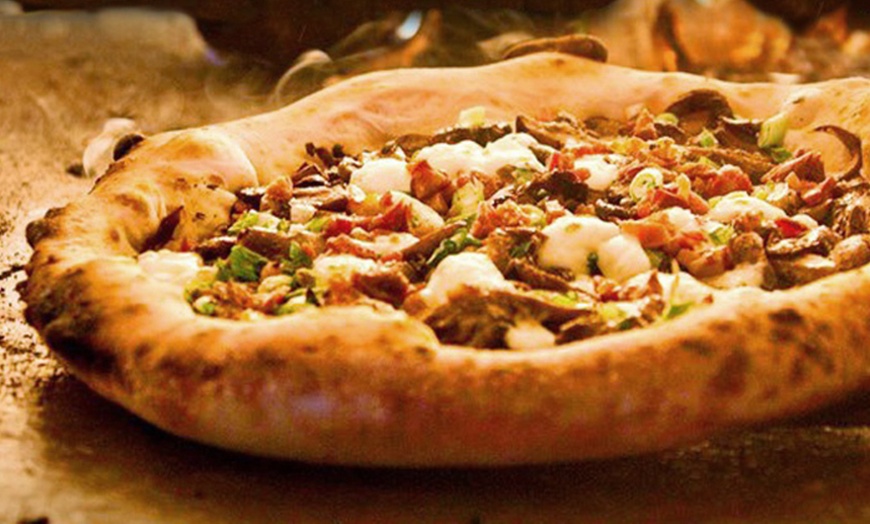 $20 Worth of Pizzeria Cuisine at Humble Pie