Petersen Automotive Museum is a top merchant due to its average rating of 4.5 stars or higher based on a minimum of 400 ratings.

One-Year Museum Membership at Petersen Automotive Museum (Up to 43% Off). Five Options Available.

4.8464 Ratings
4.8
Average of 464 ratings
95%
5%
100% Verified Reviews
All reviews are from people who have redeemed deals with this merchant.
museum
experience
display
tour
staff
extra
parking spaces
price
pictures
J
Janine
3 ratings3 reviews
Great deal. But doesn't include parking (only ONE visit)
Helpful
J
Jefftop reviewer
8 ratings8 reviews
As many have stated after going through the museum, give yourself at least 2 hours. More, if you're a real car nerd, since the cars you will see are real gems and the details are worth the extra time spent. Many are truly one of a kind, that you will only see in this very special place. I was there during the grand opening many years ago and a couple of years after that, for a special event. The venue and docents have only gotten better with the years and I will continue visiting the museum over and over, as they display more unique machines over time.
Helpful
B
Barbaratop reviewer
23 ratings14 reviews
Spend a whole day enjoying all the museums in the area!
Helpful
W
wendy
5 ratings1 reviews
Loved this place
Helpful
W
Wolfgang
3 ratings3 reviews
Has to be the best car museum in Los Angeles all types from hot rods to motorcycles to classics if you're a car guy you must go to this museum They have monthly car events and special showings join the Petersen let's keep our old cars alive the best Wolf
Helpful
G
GABRIEL
4 ratings1 reviews
Parking is theft
Helpful
H
Howardtop reviewer
28 ratings18 reviews
It is a very clean and fulfilling car experience. It's the past and the future all in one. You can see what works and what didn't. Once you've been there you know that you will return.
Helpful
S
sheila
3 ratings1 reviews
the place is amazing, the cars are incredible, and the only thing that needs some work is the video that had a very long line to participate.
Helpful
See all reviews
Earned when a user has written 5 or more reviews
Want to earn this badge? Share 3 or more photos
Earned when a user has gotten 2 or more helpful votes

After purchasing this deal, you will need to visit the website listed on your Groupon voucher to complete redemption.

Promotional value expires 90 days after purchase. Amount paid never expires. Limit 1 per person, may buy 1 additional as a gift. Must activate membership by the expiration date on your Groupon, membership expires 1 year from activation date. Valid only for option purchased. Online activation required. Museum reopens on 12/07/2015; those who activate before then will have a membership start date of 12/07/2015. Merchant is solely responsible to purchasers for the care and quality of the advertised goods and services.

Two decades after the Petersen Automotive Museum opened its doors to the public, the museum celebrated its 21st anniversary with a complete redesign, adding 25 new mesmerizing galleries totaling over 100,000 square feet. Now in its 23rd year, the museum has opened more exhibits in 2017 than it had in any previous year. New exhibits included "The High Art of Riding Low", "Seeing Red: 70 Years of Ferrari" and "The Art of Bugatti". Galleries containing more than 350 legendary vehicles compliment a suite of new interactive exhibits, including a Disney Pixar: Cars augmented reality experience and an Xbox/Forza racing simulation.

The New Petersen will feature ten cutting-edge racing simulators and eight eight stand up consoles. Simulator competitions will be held regularly, including a special 24-hour Le Mans event during which qualifying teams will pilot simulators as if they were actually on the track in France, driver changes coinciding with race pit stops.

At the Mechanical Institute, beloved characters from the hit Cars movies such as Lightning McQueen and Mater guide teams of children through the ins and outs of how the engine, transmission, suspension, fuel and electrical systems work. Kids can also pick up an iPad for a unique experience building their very own race car from the initial sketch to their custom paint job. Using Augmented Reality, visitors can see each stage of their creation as actually a part of the museum's collection. The experience concludes with an exhilarating race supervised by Lightning McQueen. 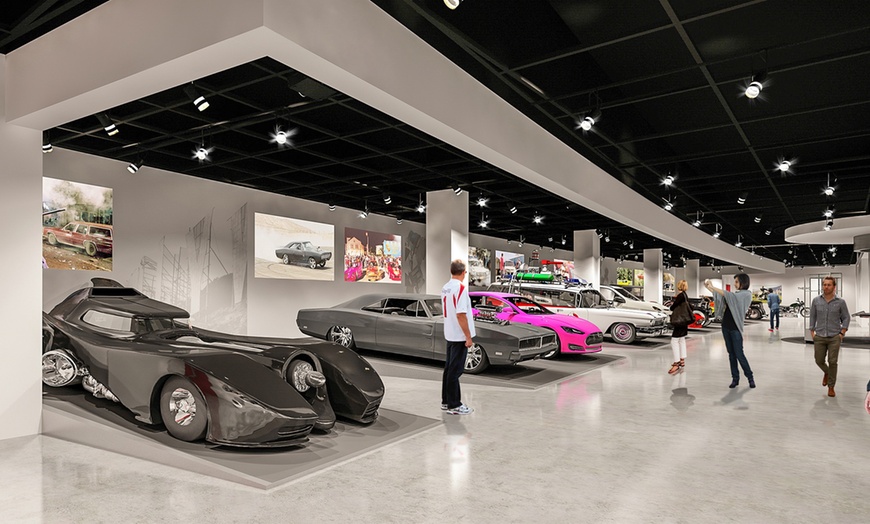 One-Year Museum Membership at Petersen Automotive Museum (Up to 43% Off). Five Options Available.