Oregon Brewery Running Series Registration for One, February 15–March 28 (Up to 36% Off). 7 Options Available

4.912 ratings
4.9
Average of 12 ratings
92%
8%
100% Verified Reviews
All reviews are from people who have redeemed deals with this merchant.
G
Guest
1 ratings1 reviews
This is a great event
Helpful
T
Tammi
2 ratings2 reviews
Great weather, food and atmosphere! Friendly staff and volunteers.
Helpful
C
Charmaine
1 ratings1 reviews
One of the best family friendly run events!
Helpful
Earned when a user has written 5 or more reviews
Want to earn this badge? Share 3 or more photos
Earned when a user has gotten 2 or more helpful votes

After purchasing this deal, you'll need to visit the website listed on your voucher to complete redemption. Learn more about redemption codes.

Expiration varies. Amount paid never expires. Must be 21 or older. Online reservation required. Must sign waiver. Must redeem voucher online at https://breweryrunningseries.com/oregon/ before race day. Limit 1 per person, may buy 4 additional as gift(s). May be repurchased every 30 days. Valid only for option purchased. Merchant is solely responsible to purchasers for the care and quality of the advertised goods and services.

In 2012, Morgan Jappe and Nate Herrington had a simple question: How could they best fuse their twin passions, craft beer and running? They answered themselves by founding Brewery Running Series, a family-friendly event that starts with an untimed 5K, set around a local craft brewery, and culminates in craft brews, food, live music, giveaways, and activities with partners and sponsors. Every runner gets to take home swag and a keepsake pint glass, too, a reminder that combining running and drinking doesn't always mean outrunning a keg rolling down the street. 10% of the event's proceeds help support local nonprofit partners. 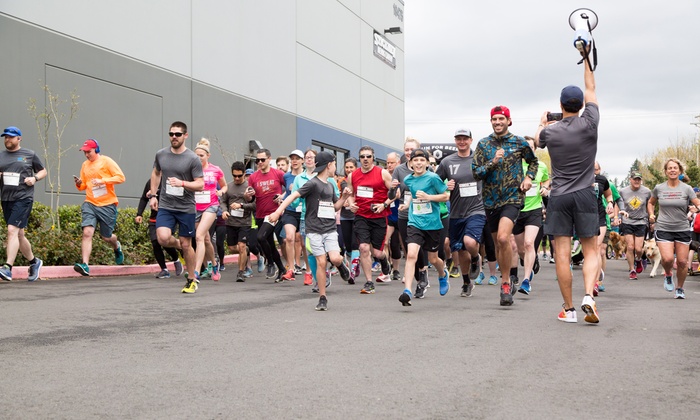 Oregon Brewery Running Series Registration for One, February 15–March 28 (Up to 36% Off). 7 Options Available